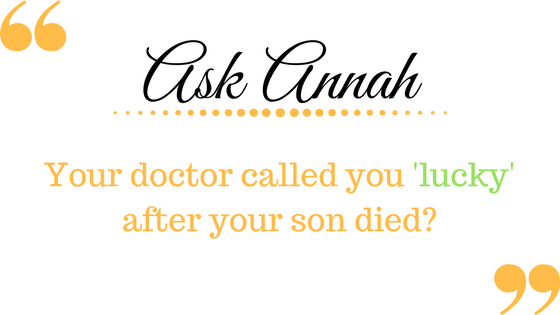 “Your doctor called you lucky after your son died?” You asked?

He sure did, Neighbor…and here’s what I later gleened from that experience…

“You’re lucky we were able to do a bikini cut,” my obstetrician said to me during my six-week checkup.

I sat across from this man who had come to know my body—well, certain parts like my vagina, cervix, and stretch marks—as well as any other human could.

I searched his eyes for some spark of recognition and watched his mouth form those words.

I heard the sounds, and though I clearly understood the language I couldn’t comprehend the meaning.

Don’t you remember me?

I’m the girl whose baby died.

Though I’d later learn that I wasn’t the only mom to experience child loss, in that moment, I felt all alone.

And this man was talking to me as if I’d left my baby home with a nanny and a lactating body-double.

I was the mother whose first pregnancy progressed without so much as a Braxton-Hicks contraction until the day I delivered at thirty-nine weeks. Or maybe it was thirty-eight.

My friend, on the other hand, had nothing but complication during her pregnancy.

I remember how excited we were the day she asked me at work, “Can you keep a secret?”

My egg and Warren’s sperm met just as we’d hoped, a few weeks after we returned from our honeymoon in the Thousand Islands.

We had no clue as we toured Boldt Castle that the legacy of our romance would include an unthinkable tragedy similar to that of the heart-shaped-island’s owner.

And none of us expected that our friends would produce a child years after an unknown Endometriosis caused a traumatic miscarriage, and just as they were in the middle of filling out adoption applications.

Then we giggled like love-struck teenagers at our good fortune to be pregnant at the same time.

We planned our futures and our babies’ futures with reckless abandon until complications cast shadows of doubt on her health. Our enthusiasm marred ever so slightly by her succession of troublesome reactions to everything from vitamins to medications.

I cheered her on before every test and fretted with her until each positive result returned.

And I cried tears of joy when her husband phoned with the good news.

Excitement welled in my veins the day I gazed upon her sleeping child, his tiny fists balled beside his head, his soft little mouth shaped into a sweet little pucker.

That exhilaration became electric when labor pains woke me at two a.m. that very next night.

The outcome was not to be as I expected, and a new story would take the place of the one I’d spent my lifetime crafting.

A freak tragedy left both my baby and me gasping for air, my child immediately after his birth via emergency cesarean, and me for many months to come.

Lucky, the doctor had called me…

Two miscarriages and four pregnancies later, I discovered that I had, indeed, been the beneficiary of a blessing, a random strand of luck.

The highly regarded perinatologist for our area happened to be in the hospital and on the maternity floor when the code blue alarm sounded during that first delivery. He was also familiar and experienced with the newer, latitudinal incision—hence bikini cut—procedure.

This type of surgery reduces risk of complication and, unlike a vertical incision, allows the opportunity for a future vaginal delivery.

Even though I went on to have a second cesarean birth, I was able to bring my third and fourth full-term children into this world vaginally. 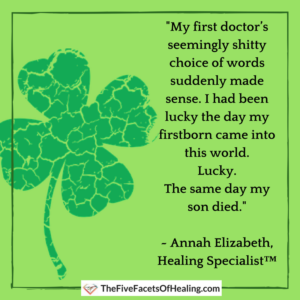 I had been lucky the day my firstborn came into this world.

The same day my son died.

Now, I’ve always been a believer that we can make lemonade from lemons, but I also recognize that it takes time and patience and awareness.

Awareness to ourselves and everything around us. Not that we need to accept everything we come in contact with, just simple awareness…discarding that which we don’t feel relevant…

I’ve also always been a believer that this thing called luck does exist. We just have to keep our eyes open to its presence when it flashes in front of our faces.

One day, as I bent over to pick up palm-sized piles of poop that my hundred-pound dog dumped in my backyard, I spotted a four-leaf clover.

As I reached down to pluck it from its roots, this is what I saw. 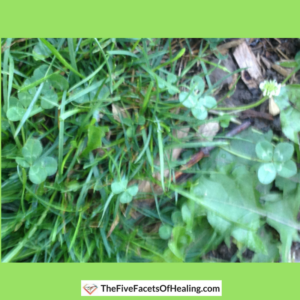 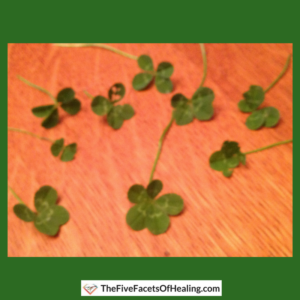 And in a space no bigger than my nine-inch pie dish, this is what I found.

And like this life, some of them were pristine, while others were chewed on and a bit ratty.

Nevertheless, the inspiration was there, waiting for me to pluck it from my path.

Where will you find your next stroke of luck, Neighbor?

I am not only honored to receive your queries, Neighbor, I LOVE answering them! As the saying goes, The only stupid question is the one not asked. Let us know your burning, nagging or curious thoughts! You can leave your question in the comments or email it to us. All questions are considered anonymous.

If you have tips or strategies that relate to this topic, please share in a comment below for, as I like to say, “Together we are helping heal worlds of hurt.”

Until next time, take care.

Yours in hope, healing, and happiness,

2 Comments on “Ask Annah: Your Doctor Called You Lucky After Your Son Died?”