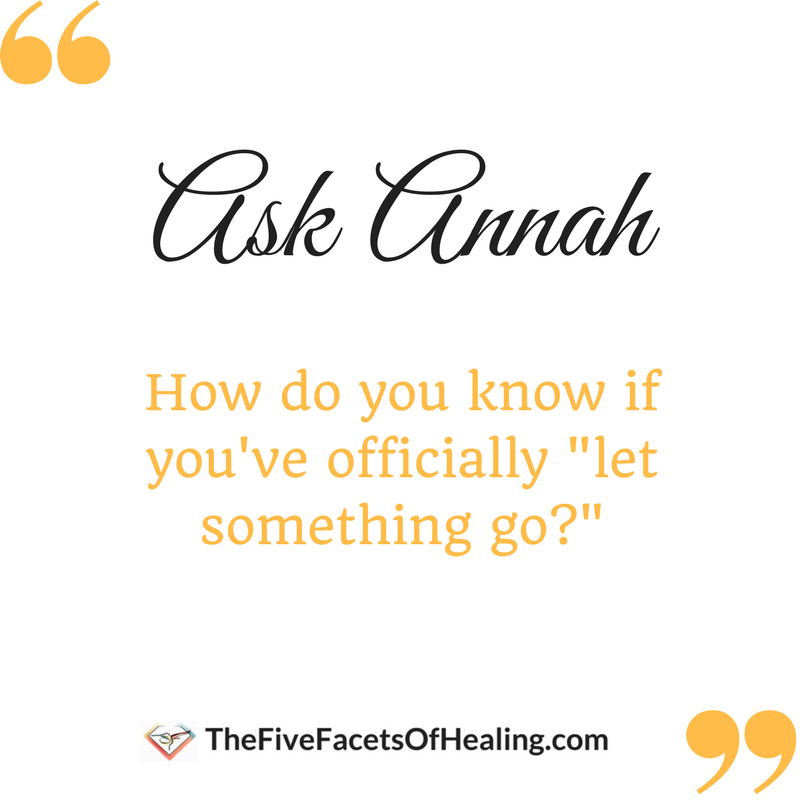 “How do you know if you’ve officially let go?” asks one of our neighbors.

What a beautiful question.

There really is no one right or wrong answer.

The simplest answer is that you just know. You feel a sense of peace or resolution from your belly to your bones.

Sometimes the heavens open, the angels sing, the doves circle your head, and suddenly your kids are Perfect Light and your husband is The Fairy Tale Prince, himself.

Oooookkkaaaay… so that doesn’t really happen, no matter what someone’s Facebook Hi-Lite reel says, but it might feel that way. It might feel as if your world has instantly shifted. If it feels this way, believe it; relish in the peace, and enjoy every nanosecond of it.

Sometimes the letting go process is a little more like a time release capsule. You have a series of little epiphanies and one day you wake up thinking, I feel different today or Wow, I feel so…good.

You know the saying that sometimes you don’t realize how much pain you’d been in until you’re no longer suffering? You neglected that ache in your back for months and it just became a normal part of your days and nights, but then one day you decide to call the chiropractor and instantly your body goes aaaaahhhhhhh…and the angels sing and…

Sometimes it gets worse before it gets better and your body says “What the ‘F’ did you DO TO ME?” The muscles are all jacked up because they’ve gotten used to the different spinal alignment and you’ve just given them whiplash. But then they settle down and move back into their rightful place and you wake up one morning and realize, Wow, I didn’t realize how badly I hurt before I saw Dr. Magic.

What do some of us then do? We begin chastising ourselves for not going to the doc sooner. We tell ourselves how lame we are and how we can’t believe we did this to ourselves, again, and we make a pact to never ever wait that long again because, well, damn, I feel so good. And the loop plays over and over in our heads for a few days.

When we talk about “letting go” we are basically referring to our Emotional Facet.

Here’s a little, but mighty truth that many people don’t know: 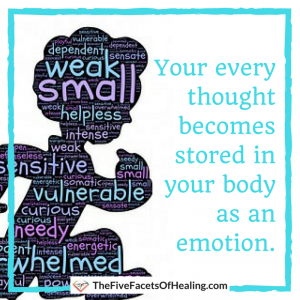 Let’s say you’ve finally decided you’re not going to allow yourself to feel guilt or shame when your mother-in-law–who is known for her gourmet meals–jokes about the hot dog and beans dish you’ve made for your family the third time this week.

You choose other ways to accept or cope. Maybe you invite her to cook for you once a week (not in a shaming, tit-for-tat kind of way) because you need the help and she’s been talking about wanting something to do with her free time now that she’s retired.

You might choose to recognize that MIL is possibly feeling unworthy and experiencing self doubt of her own because she’s never found a passion or a hobby and now that she’s retired she has no freaking clue what to do with herself, and she happens to be mirroring (or vomiting) her stuff back on you.

You might choose to dig out from the bottom of the closet the Crockpot and Crockpot cookbook your sister gave you a few years ago…to take your teenagers to a cooking class and allow each one to cook one meal a night (of course it comes with the car keys and credit card so they can go to the store to pick up the ingredients.) Which means more free time for you. That’s what some would call Win-Win!

You might even choose that you and your family enjoy hot dogs and beans, both in taste and simplicity. You decide  to throw in a salad for good measure. Or not. Because, hey, you’re the captain of your own ship and kitchen.

The beautiful part of all of those scenarios is that you are choosing to let go of the guilt and shame attached to your meal, to accept your situation in a way that is right for you, and only you.

This example might seem trite, but let me tell you it happens in homes and family dynamics on a regular basis. Right now some of you are reading this from your mobile device whilst you open said can of Bush’s Best and slice those All Beef Franks. I know because I’ve walked in similar shoes.

Though we’re all capable of “letting go,” it looks differently on and for each one of us.

What emotions have you stored that you’re now wanting to let go?

Fear. Am I screwing up my kids for life? Am I going to have a meltdown right here in my kitchen?

Stress. Those thoughts are only making you do things like tip over said can of beans or slice your finger (or both), which means it’s going to take even longer to get the food onto plates and into your screaming, starving, children’s mouths.

Guilt, shame, and maybe even a dash of jealousy tossed in for good measure.

Anger. Anger toward someone else. “Who is she to tell me how to live my life/raise my children?” Anger toward yourself. “What was I thinking when I decided to have three kids and then to go back to work; I don’t have what it takes to manage all this.”

Shortly after Warren and I married, we made a trip to Niagara Falls. Warren tugged on my arm to show me this t-shirt on a street vendor’s table.

It had a picture of that cartoon character Calvin, with the following quote: “Every day of my life I’m forced to add one more name to the list of people who piss me off.” I not only purchased that shirt, I eventually folded and buried the threadbare piece into the bottom of my drawer. Why? Because it so eloquently summed up some version of what I said almost daily and it was too good to throw out. How do you say “Hanging on?”

“So-and-so pissed me off today,” was a regular part of our “How was your day, Dear,” conversations.

It wasn’t until my massage therapist asked me if she could practice a new therapy she’d learned on me. Energy work, she called it, that I finally understood why I was always rubbing up against anger. “Sure, why not,” I replied.  And then I felt this thing happen in my body. “What were you doing there?” I asked her about the heat sensations I’d felt in a particular part of my body.

Journeyer, I’d been seeing a talented therapist on and off for years and nearly every time I sat in the chair across from her I’d ask one or both of these questions, “What is resentment?” and “Why can’t I trust?” Turns out resentment is simply unreleased anger, in rudimentary terms, it’s the anger that you bottle up on the inside as you present to the world someone who’s cool as a cucumber.

Turns out that some times we can’t talk or analyze our conflicts and stress away because our body is holding on to those negative or limiting energies. Integrated Energy Therapy® works with the body to release energies like shame, guilt, fear, anger, and distrust and then asks the body to receive the energy’s positive counterpart.

I felt an immediate “letting go” of tense energies after that first session, but it wasn’t until months of my massage therapist practicing on me that I one day realized that I wasn’t suffering like I had been. I didn’t know what “not angry” looked and felt like because I’d been carrying those bags of puss around like body armor.

Considering that it had taken me five decades to store up enough angry reserves to last me a lifetime, I consider it a miracle that I could rid myself of it in less than six hours. And it is. Miracle can be nothing more than an amazing event, and let me just say that I felt amazing the day I realized that I’d gone from being pissed off on a daily basis to feeling pleased about my life and my surroundings.

How do you know if you’ve officially let something go?

You either feel it in your body or you make a miraculous choice to do or think differently. This doesn’t mean that you will never again hold on to a similar thing, but it does mean that you are equipped with an entirely new set of skills, thinking, or being.

What will you let go of today, Journeyer?