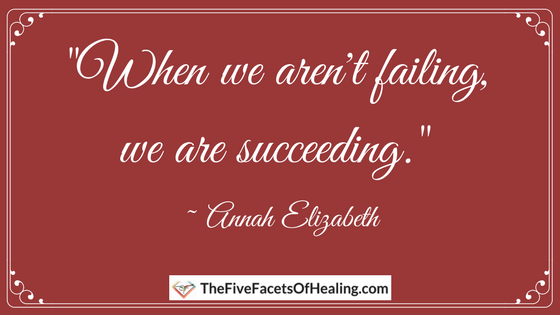 Well, Journeyer, it’s been one heck of a couple of days!

Two days ago a cyber monster ate my five-hundred and some new and saved e-mails.

Though most of them were correspondences I’d saved for further research, there were a few critical ones I’d hoped to refer back to.

If you are waiting for anything from me, please reach out, again!

Now, as I sit down to put the final edit on today’s post, I cannot find it.

It seems my computer did an automatic update and shut down. I hadn’t saved it.

I have two choices: To sit here and whine about all that is lost, or decide to celebrate the fact that I no longer have to fret over the mounting pile of mail, and to assume the notion that the absence of the previous post is this post’s gain.

The universe has such a way of connecting the dots of our lives!

The Fear topic seems to be circulating. If you missed this article by Richard Branson, one of the world’s most influential entrepreneurs, take a moment to read his take on how to calm public speaking jitters.

Last night I submitted a draft of the speech I’ll be giving at Clarity Connect’s upcoming event. If you live anywhere in the Fingerlakes region of New York, you should definitely consider attending their inaugural event!

The topic of my speech? What fills the space between caution and accomplishment? Fear, Journeyer, either in the form of healthy fear or unhealthy fear.

While doing some research for this talk, I stumbled across this post on fear; it’s one of my favorites, Journeyer, so I’m happy to share it with you again.

May this reading take your fear to an entirely new and liberating level.


“I’ve been absolutely terrified every second of my life-and I’ve never let it keep me from doing a single thing I wanted to do.” ~ Georgia O’Keeffe

Journeyer, I came across this quote while reading Glennon Melton’s post Sacred Scared.

Wow, just wow…
Glennon has this beautiful and forceful, yet gentle at the same time, way of reminding us all that we are okay just the way we are.

In Digging for the Light, I talk about how I was that terribly scared person, held back from living my best life both before and after the rape, but how I also realized that even when I didn’t think I was attaining any type of productive, inspiring, and not anywhere near some sort of wholeness, I actually was.

I was probably afraid. Of myself. I’m guessing I believed the whole incident was my fault.
I was the one who was in the wrong place.

I must have done something to deserve the trouble I’d gotten myself into.

Everything was always my fault.

Something was wrong with me.

Dad and I never spoke of itagain.

Forget about it. What’s done is done.

That was the message. And that’s what I tried to do. My mom didn’t know until years later.

But it stalked me: I couldn’t see it, and I didn’t know what it was, but I could smell it, like a tail-flicking, ears-pointed, hoof-stomping deer.

* * *
Sometime near the end of my junior year, I changed. It happened practically overnight, and the change in my behavior, my attitude, and my lifestyle shocked everyone.

I started drinking a lot, which frequently brought me to a state of depression and tears. I occasionally skipped school and developed an “I don’t give a damn” attitude.

Outwardly, I portrayed a confident, gregarious, mature-beyond-her-years girl with a warm heart, deep emotions, and a little flair for the dramatic.

Inwardly, I felt like a confused, babbling, didn’t-measure-up, massive flesh of insecurities.
This divergence of self existed for many reasons: some inherent and likely gender-related, some culturally induced…and for some I may never know.

I realize now that the brewing turmoil had existed long before that fateful night at the bar. It was probably that night, however, that became the catalyst for my outward expression of the internal conflict I’d bottled inside for so many years.

You see, even though I didn’t feel confident or outgoing or like I was making any kind of positive impact in this world, I was. And as my counselor so poignantly pointed out, “People just can’t fake that stuff, Annah. Not even you.”

Though I absolutely agree 100% with Glennon, that we all need to feel empowered to show up with our grubby hands and messy lives to do the things we are called to do, I also believe this: That it is equally important that we recognize all of the little things in our life that indicate that we are moving forward, that we are living and breathing and accomplishing something, even if it is just brushing our teeth or opening our eyes and then choosing to close them, again, because we feel as if we don’t have it in us to stay awake or get out of bed.

Those are choices, Journeyer.

That choice is an indication that we are doing something, that we are alive, that we are not victims of our circumstance, but rather someone who is capable of deciding what we are going to do in the face of something crippling. And we are taking action, Journeyer, even when it feels like we aren’t doing what we want to be doing, we are…we are just choosing one action over another…

Even when we are telling ourselves we want to be doing something different than eating all sixty-four-ounces of Mint-ting-a-ling straight from the carton, and that Depression or Grief or Loss or Circumstance are in control…we are the ones making the choices…

We might tell ourselves that our choice to stay home and hide beneath the covers or behind a half gallon of ice cream are a bad thing, but I ask you this? Is it? Is the choice to give ourselves respite or to actually sit with our sadness, to honor our grief, a bad thing?

Now, I’m not suggesting that we make a life out of staying beneath the covers, buy stock in Ben & Jerry’s, or one of walking around with the stench of depression hanging like a cloud around us. But here’s the thing, all too often we feel as if that depression or grief or loss or chaos or [insert your word] is our identity, when in essence it is only a part of us.

I believed my depression consumed me entirely, that it defined me, that I was barely functioning, that I was at a standstill and everything was passing me by.

Obviously, that was not the case.

I was alive with energy, even if I didn’t recognize it.

Read on as I summarize a mere portion of events I wrote about in my journals.

I laughed and played with my children and my husband. There were trips to McDonald’s™, the mall, a light show, movies, and a ”Miracle on 34th Street.” Swimming and snow angels and frosty snowmen. Home videos, photos, puzzles, and games. My creation of the “grouchy monster,” a silly monster that nibbles on you in your sleep and makes you cranky in the morning. Two Halloweens, two Christmas celebrations, four custom children’s birthday parties—including the transformation of our yard into Pooh’s Hundred Acre Woods. One birthday celebrated in heaven. Numerous other celebrations. Two Father’s Days, a Mother’s Day, an anniversary getaway, family gatherings, Easter bunnies. Valentine’s hearts. Kissing and making up. Pre-school and kindergarten, stories and nap time (a lot of the latter for me)…

Those of us who aren’t living our best lives are often holding back because of some sense of loss: Loss of security, confidence, courage…

As Glennon points out, we tell ourselves that we have to “be ready” for the next challenge or course of action, that we have to have reconciled our conflicts and to have healed our hurts before we can move forward into the life we want… a different life from the one we have.

So many of us get stuck here because we have some sense that we aren’t in control, that we are puppets to our circumstance…

Acknowledging that we are breathing, moving, and functioning not only buoys us, it’s like a mega dose of encouragement.

Accepting that we are the ones making the decisions about our decisions is empowering and motivating.

Knowing little about Georgia O’Keefe’s life, I did a quick search to discover that this brilliant artist’s early life included many hardships; that she left the work she loved for many years because she didn’t want to conform to the styles she had been taught; that she became involved with a married man, one who was a big driving force behind the recognition of her artwork; and that she suffered a nervous breakdown in her mid 40s, which is attributed in part to the affair her husband had with a much younger woman.

I don’t know when in her storied career she made the statement at the front of this post, but I do believe that taken out of context it appears to be some magical, effortless piece of advice, like some invisible shield that protected her and allowed her to walk right past those fears, thumbing her nose at them and giving them the finger with her other hand.

Sometimes we make choices that turn out to be not-such-a-good-thing for us. I would surmise that after her husband began an affair with another woman, O’Keefe questioned if she shouldn’t have seen that writing on the wall when he left his previous wife for her.

I certainly know that, when my clothes become a little snug and the dial on the scale climbs, that I lament my weeks of food abuse.

What do we do when those thoughts creep in?

We often get depressed about being depressed, we eat more ice cream all the while fretting about the calories, we become even angrier about being angry in the first place, our sadness becomes even sadder, and before we know it, we aren’t sad or angry or depressed, we are Sad, Angry, or Depressed.

I think there are three parts to O’Keefe’s statement: Fear, Failure, and Forgiveness, maybe?

Times in her life when she felt crippling fear and loss. Times when she succumbed to those things. Times when she forgave herself for those things she considered to be failures, thus allowing her to forge on living her best life.
That said, looks like there are four parts to O’Keefe’s inspirational statement and what we’re seeing are the first and the last.

Though we cannot control fear, we can control how we react to it.

We can also choose to perceive failure as a pitfall or a stepping stone.
We can choose to accept failure as inevitable and grant ourselves grace and gentleness for those times we err.

We can choose to keep moving forward, trying new things, having open minds, and believing…believing that we are worthy, just as we exist in any given moment…

J.M. Barrie, the brilliant mind behind Peter Pan, has this to say about failure: “We are all failures-at least the best of us are.”

Less literally, we aren’t Failure, but we are beings who fail. 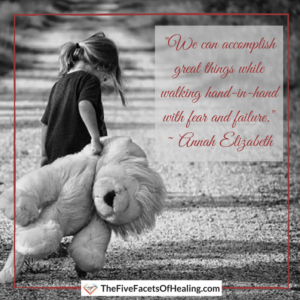 The most significant piece of that truth is this: When we aren’t failing, we are succeeding…

Acknowledging our accomplishments and those little, daily triumphs, is the armor we need to walk hand in hand with fear and failure, to embrace them in a manner that will enable them to enable us to live our very best lives…

And if you don’t believe me, check out these videos, and see for yourself one of the ways Glennon Doyle Melton,  Elizabeth Gilbert, and our own Annah Elizabeth accomplished great things all the while being human and living with fear…

Let’s be human together, shall we?