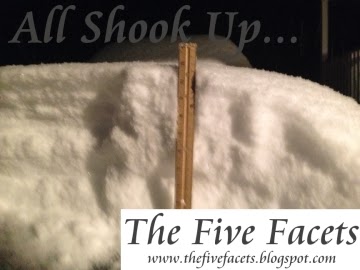 Proverbial Shit has been knocking on my door this week, Journeyer.
Nagging nuisances that just sort of make us feel icky and ornery and rundown.
Three words to kick it off: Snow. SNOW! (EVER-LOVIN’-F-IN’) SNOW!! This is on the hood of Warren’s truck!
And leaving for work in more subzero temperatures that dipped to MINUS TWENTY! What’s all this nonsense I hear about Global Warming?
I (along with the rest of my countrymen) have had my feel of Winter.
I don’t usually mind the cold, but this has just gone on entirely too long.
And the days are super short.
And dark for far too long.
And I definitely suffer from Seasonal Affective Disorder.
Do you think that could be enough for one freaking week?
No.
First, our washing machine went on the fritz, but fortunately, Warren was able to tear it apart and replace the bearings and seal for only about one hundred dollars.
In last week’s post I talked about the joy I felt when we replaced our malfunctioning microwave.
On Thursday I came home to water dripping from our fridge’s door dispenser.
About a month ago, an entire gallon of milk froze in our refrigerator.
Warren adjusted the temp control, thinking the dial had just been bumped, and after the freezer items began thawing he made numerous other adjustments.
But three days ago, when we discovered that the entire ice tray had melted, we couldn’t deny that there was a serious problem.
Handy Hubby Googled the problem and contacted a local repair center for parts, but they told him they thought it was a different area of concern and told him to check a few more things.
That problem still isn’t resolved, so half of our food is out in our three-season room, while the stuff that can handle the changing temps is still in the fridge.
In addition to this nonsense, I’ve been battling a scratchy, sore throat since Monday.
As if this personal stuff weren’t enough to make for drudgery and doldrums, work hasn’t been much better.
With each passing day, the moon grew bigger and bigger this week, slowly but surely culminating into a FULL FREAKING MOON on Friday.
FRIDAY!!
Not only did that celestial body make my students C-R-A-Z-Y, it had to show up on a Friday, when they’re already wired and worn out and more than ready for the weekend.
My kids had numerous arguments and a couple of slapping/hitting situations that I had to deal with throughout the week.
As if THOSE TWO THINGS weren’t enough, it was Valentine’s Day, which means classroom parties filled with all kinds of sugar and presents and added commotion.
BUT WAIT, THERE’S MORE!!
Just like a freaking “As Seen on Television” commercial: Not only did we get the energy that comes with a Full Moon, a Friday, and a holiday party, we get a Full Moon-Friday-Party that just happens to be THE LAST DAY OF SCHOOL BEFORE A WEEKLONG VACATION!
Yippee!!!!!!!!!!!!!!!!!!!!!!!!
A high percentage of my ninety-five elementary-aged students were bouncing over their seats and practically off the walls.
The mouthy were even mouthier, the loud were EVEN LOUDER, the silly even sillier, the needy even needier…
I’ve been talking with my supervisors for two months about the need for some overcrowding relief, and I finally just about lost it on Friday.
A month ago they devised a solution, but the coworker they assigned some of these students to complained, so they tabled the problem.
And tabled it and tabled it some more when other more pressing issues surfaced.
On Friday afternoon I informed my boss that I was almost at wit’s end and that my sixty-three third-through-sixth grade kids were almost ready to come unglued due to their cramped environment…
But, here’s the best part, it’s this column’s motto: “Just like the proverbial shit happens, Happy happens.”
All we have to do is notice those things that make us feel good and find some way to honor them.
Honestly, had I not had these photos to remind me of what went right this week, I might have been hard pressed to say that there were any bright spots.
But there were, Journeyers.
Here are the highlights…
I am always inspired by my children’s academic successes, and this week proved no different when Big Guy’s report card arrived in our mailbox. All honors and ACE college classes and an incredible 99.75 average after mid-term exams!

I also enjoyed making these heart-shaped, pink pancakes for my boys for a Valentine’s breakfast. And then, I found myself all shook up in a different and good sort of way Friday night as we watched Elvis impersonator, Chris Macdonald. My mother-in-law invited me to go to the concert with her, and since it was Valentine’s Day, Warren came, too.
We had a nice dinner beforehand.
I have to tell you, if you ever have a chance to see this band, you definitely should go! It’s a great concert!! Chris commented several times about how hot that leather was.
All I can say is that the female audience seemed to feel the heat radiating from him. The artist (quite surprisingly) mentioned the hotel he’d be returning to and invited the audience to join him afterward.
Warren and I almost didn’t go because we figured the place would be mobbed.
Must be everyone else thought the same thing because there were only two other couples who showed up.
I struck up a conversation with two women at the bar, who turned out to be two of Chris’ relatives who’d been at the concert and showed up to visit.
Hungry and tired after a long day and what has got to be an absolutely exhausting performance, this fantastic buy grabbed a quick bite to eat and then posed for a few pics with us. And then to end the week on the brightest note of all, Fave initiated a FaceTime call from Australia, where he’s teaching a training seminar.
We had a nice chat, me and him and his little brother, Big Guy.

Now that’s a great way to end the week!
What about you? What Moment(s) made you smile or warmed your heart this week? Share them here and shake up a little joy for the rest of us!
Soon…