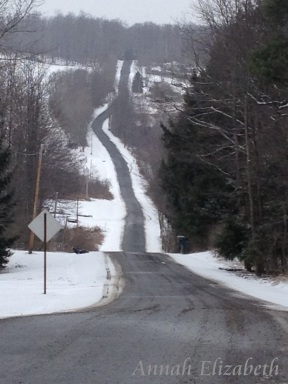 On one of my recent trips I crested this hillside and was transported back to one of our family vacations.
We were heading home from a trip to North Carolina, years before GPS became a household name.
After realizing we’d somehow taken a wrong turn, Warren consulted the giant Rand McNally we kept in our car.
There he found an alternate route.
A shortcut, he declared. We found ourselves snaking in and out and up and down some of the most mountainous terrain we’d ever seen.
We’d secured SS, who was about two at the time, into the center of the middle seat so he was easily accessible to either of us from the front.
From his spot he had a birds-eye view of the landscape that lay ahead of us.
Warren’s hands clutched the steering wheel, while I sat rigid in the passenger seat.
The dips in the road were like that of a roller coaster ride, the kind where you feel that Blup! in the pit of your stomach as the cart takes a sudden freefall.
As we began a quick descent after bouncing to the top of one of the steepest hills I’ve ever seen, little SS let out a piercing Whhheeeeeeeeeeeeeeeee! from behind us.
He started kicking his little legs and giggling.
Warren and I lost it.
In a fit of laughter.
What about you? What simple moment(s) brought a smile to your face this week? Do you have a road trip story that has amused your family for years afterward?
Soon…﻿