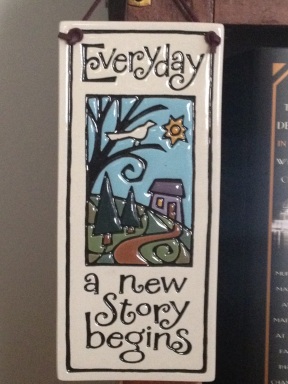 “Every day a new story does begin, doesn’t it?” The shop owner said as he rung up my purchase.
“Sometimes it doesn’t even take a day,” I replied.
“Every second a new story begins.”

I learned this lesson twenty-two years ago.

In the labor and delivery room.

When I saw the fleeting look of panic in the nurse’s eyes.

When her hasty retreat from the room shattered my picture perfect pregnancy.

When Warren returned from his business call, and my voice quivered out, “I think something’s wrong with the baby.”

When I felt the gush of fluids after the doctor broke my water.

When the room became a flurry of people barking orders and poking me with needles.

When the nurse said to my hubby, “We need you to sign these release papers.”

When I woke from the foggy haze and choked out a whisper.

Everything changed in a second.

When I screamed out for Warren, just before everything went black, again.

I had never really experienced death.

My parents had to put our dog to sleep when I was away at college.

I cried myself to sleep for days.

But no cousins, brothers, sisters, or friends had ever passed away.

Even my grandparents were living.

A few years prior, the mother of a new co-worker had died.

I didn’t want to go to her funeral, but my boss wouldn’t take no for an answer.

I left the funeral home, as gracefully as I could, when I saw people draped over the corpse in the coffin.

They are touching and kissing a dead body.

I hid behind an ancient oak, sobbing and gasping for air.

My fear changed in an instant.

“Where is he? I want to see him,” I informed the staff even before the anesthesia wore off.

When they delivered him into my arms the first time, I couldn’t even open my eyes.

But later, when I was more alert, and the medical team agreed to bring him to me once more, I drank in every ounce of my firstborn.

I caressed his rose-petal-soft skin.

I stroked his thin layer of black hair.

Everything changed in an instant.

“It’s time,” the nurse said for the second time.

Her murder unsolved for two-and-a-half decades.

Everything changes in an instant.

I stumbled upon this news piece today.

The killer has been caught.

The family’s life altered in an entirely new way.

*  *  *
News headlines are littered with accounts of sudden death.
Sage Stallone, son of Sylvester Stallone, dead at age 36.
Huffpost reported the story of eighteen-year-old Brittney Walsh, killed by a drunk driver just days after her high school graduation.
New details in the JonBenet Ramsey murder, still unsolved after sixteen years.
The Aurora movie massacre.
Countless other stories that never reach mainstream media.
*  *  *
Shortly after Gavin died, a tempest raged outside our home.
Rain pelted the windows as thunder shook the ground and lightening lit up the sky.
As quickly as it had begun, the storm subsided.
A brilliant rainbow left in its wake, arcing across the dark sky.
And we saw it…