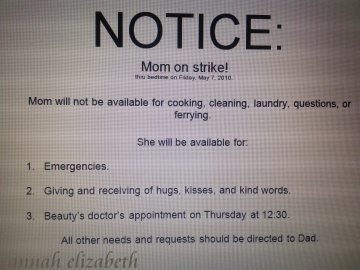 My oldest son’s break-up with his girlfriend took its toll on all of us. Those of you who are parents of teens know all too well how chaotic such a dramatic event can turn one’s life upside down and inside out. HA! All of us know how drama in our lives can upturn the apple cart, so to speak. The most worrisome part of it for me lied in the fact that he was not sharing what was going on in his life with my husband or I. To boot, he was seeking advice from people that we felt were not ones to be sharing responsible commentary or feedback. Three days into the week, my husband finally convinced him to discuss the matter with him.

Turns out, he felt betrayed, deceived, and duped by the girl who had been his girlfriend of two years. They had decided to “take a break” a couple of months back, but still wanted to be friends, talk on the phone, attend each other’s senior proms, and were planning to date when they go to college later this summer… I know, I know, you don’t have to tell me, and no adult can tell them how muddled such decisions become. And muddled their correspondences did become, fraught with frustration, confusion, anger, sadness…
This saga could continue for many more paragraphs, but here’s how it ends: I functioned on five hours of sleep, three nights in a row, trying to be sure my child was safe and not making irrational decisions in his hurt. The female friend arrived at our house as scheduled. There had been a big misunderstanding. She and my son found some clarity in their situation, and had a good time at the prom. She went home.

Remember, however, that I am raising three teenagers. What can I say? I thought it would be a good idea to space my children about two years apart; one would just be out of diapers when the next entered our world, and how wonderfully close they would be! Double HA! Clearly I wasn’t looking at the big picture and what it would be like to experience life with three teenagers at the same time. When it’s good, it’s good, and when it’s bad… well, the last two weeks sucked.

Just when I caught a breather as my son’s saga settled down, my fifteen-year-old daughter pulls one over on us when the boy she brought to the house to visit turned out to be more than a mere friend. She insisted “they were just friends” until I pointed out that there was no way the marks on her neck were bug bites. Yep! You’re smiling, aren’t you? Me, too. I’ve cried plenty of tears these past two weeks, so now I feel I must smile… Hubby and I sat her and the boy down and proceeded to inform them–reiterated to her– what is and is not acceptable… My daughter, who has been my rock for all of these years, steady as calm seas, is now one hormonal wave, at times beating the shore that is my life…

Speaking of hormones, did I mention that my own estrogen levels had skyrocketed in the same fourteen-day period? My breasts hurt to the slightest touch, I was bloated, lethargic, sleep-deprived. and overwhelmed with two of the three teens in my life. Sometime during the week it dawned on me that maybe I shouldn’t have abandoned my daily vitamin regimen a couple months back… Vitamin B does wonders for mood stability!

And, to top it off? My annual mammogram was scheduled for Wednesday morning. I thought two seconds about canceling it, but knew I would likely not get around to rescheduling until next year. Ah, what’s a bit more pain? I’m going to get it all out of my system now, then it will be smooth sailing from here on out… But I am getting ahead of myself…

This past Monday, my oldest, the one who has been surviving these past six months on fast food or fried food from his cousin’s deep fryer, the one whom also has decided the truck we provide him to drive isn’t suitable anymore, called from work. “Hey, mom, what’s for dinner? I’m starving and I don’t want to eat out much anymore because I need to save my money.” Did I mention he suddenly wants to save his money because he wants to buy a Corvette? A 1984 Corvette! Breathe with me, come on, breathe…

The commercial that comes to mind is the one where the college-aged boy comes to the table and has to remove the booster seat before he can sit down. I think the narrator says, “Been a while since you’ve had dinner together…” Something like that. Despite the fact that I cook most every night, he rarely is home to eat, and when he is, he often will only eat a toddler-sized portion, and then break out the deep fryer an hour after he’s gotten up from the table… Yes, I feel your smiles already…

“I’m not fixing dinner tonight. We are all just fending for ourselves. There’s turkey, leftovers, pb and j, and a pantry full of items you can fix when you get home.” I told him. Nicely. That selfishness struck a chord, and a few nerves, in me, and let me just say there had been so much friction emanating from me for a week, that had I struck a match I might have spontaneously combusted. In that very moment, I decided to go on strike. I opened a Word document and made a poster:

NOTICE: Mom on strike! (thru bedtime on Friday, May 7.)
Mom will not be available for cooking, cleaning, laundry, questions, or ferrying.
She will be available for:
1. Emergencies.
2. Giving and receiving of hugs, kisses, and kind words.
3. Child’s doctor’s appointment on Thursday.
All other needs and requests should be directed to Dad.

I thought I was soooo smart. I hung the signs on each of the bedroom doors, one on the microwave, and one on the back door (it would serve as a reminder each time they entered the house.) For one week I would refrain from picking up the slack for my children when extracurricular activities afforded them little time to take care of all of their responsibilities. No dishes, no laundry, no sweeping floors for me. My children would have to dig deep, buck up and see what life in the real world is all about. My children would certainly take note that I wasn’t pitching in and doing some of their daily chores for them. They would come to me and tell me how much they love me, how much they appreciate me, how they now understand the life lesson I’ve been trying to teach…

My youngest immediately began obsessing about how he was going to get from point A to point B without violating my freedom. My daughter did seek me out at bedtime, give me a peck and wish me “good night, Mom.” My eldest entered my office when he came home from work. “HA! HA!, Mom, that is soooo funny!” He wrapped his arms around me, lifting me off the floor, as he continued to guffaw.

Aaahhhh, this is going to be one of the best weeks of my life. Look how effective my strike is already.

Triple HA! My little tizzy had its fifteen minutes of fame and promptly fizzled. I spent the rest of the week pulling my hands back from the pile of dishes that needed to be put away, and resisting the urge to prepare dinner. I did take out a half bag of garbage that must have had meat scraps in it. As I was carrying it out I kept thinking probably the best way to prove my point would be to leave it for them to smell, but I had to get it out of the house for me. I didn’t transport a child one until Thursday when my poor husband explained how he was going to manage multiple, overlapping events for our youngest two. I conceded defeat.

Yes, hubby had made the oldest rise early and tend to the dishes he’d let go the night before, and he’d made them all tow the line as best he could. That was that. I did manage to leisurely shop for some Mother’s Day gift materials one night, but, other than that, I believe my little strike may have been a lesson in futility. Now, if Dad were to also go on strike…

The simple truth, however, is that I cannot let go of my parental responsibilities. I do know a number of parents who leave their children to find their own transportation, make their own arrangements because Mom and Dad are off taking care of themselves. I, however, am only a parent once and I want to be there for my children. I want to attend their events. I want them to understand that people work together and help one another. I want them to understand kindness and generosity and compassion and responsibility and diligence and dignity… I must trust that each day they are learning those lessons from watching what I do, not simply hearing what I say… As with everything in life, I must persevere the tough times and try to remember to embrace the good ones. In other words, I must strive to strike a balance.

And now, friends, it is 9:34 PM and I must say goodnight to you as I promised my seventh grader a rousing game of cards. Happy Mother’s Day to all of you mothers, and a peaceful day to all!

ps Today was a most glorious and relaxing day… This, too, did pass! 🙂

2 Comments on “Striking… something…”