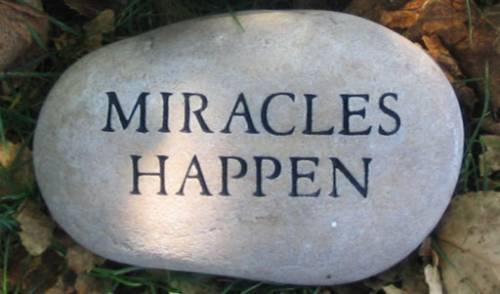 Miracle is such a tough word for those of us who have faced destruction and devastation.
The miraculous is usually attributed to some variation of God’s Will, Plan, or Divine Intervention.
In the wake of Gavin’s death and Warren’s subsequent affair, I hoped for a miracle of my own.
Not your typical pleas for health, wealth, or healing.
I wished for God to end my life.
Begged him to terminate the bottomless pit of pain that I believed was more powerful than me.
I wrote about those appeals, which seemed to fall on deaf ears, in Digging for the Light.
I’d heard repeatedly what people say in times of suffering. “God is not a cruel God. He is a loving God.” Throughout my years, I’d borne the knowledge and witnessed testimonies of so many who were reportedly granted miracles through prayer: “We all prayed… Our prayers were answered… It is a miracle…”
That verbiage is prolific: Newspaper headlines, daily language—including my own—television, radio, billboards, ads…
My headline read: “Prayers never answered. Bail denied. Found guilty.”
I entered the black hole of depression.
At times I succumbed to the darkness:
As I stood at the sink, washing dishes, I prayed: “God, please end my life for me.”
Day in and day out, I truly felt I wanted to die.
Sometimes, when I thought about the fact that I was still alive, despite my pleas, I felt that much more like a failure and I considered it pathetic I couldn’t even get dying right.
But the crux of the matter is that I didn’t really want to die.
I simply wanted to feel comfort.
And part of something whole.
And loved.
By everyone, including God the Almighty, Himself.
I was one of so many who associate Miracle with an act handed down by what we grow up knowing to be Our Lord and Savior.
Rescuer. Liberator. Redeemer.
My savior. Your savior. Their savior.
Even after I reconciled my spiritual conflict, and came to realize that Death and Destruction are not some form of Divine Intervention, I still felt a bit of resistance when I heard expressions touting Miracle and The Power of Prayer.
“It’s a miracle!” someone wrote on a social media site about the return of a family’s dog missing for five days.
“Not a miracle,” I replied, “but the diligent and dedicated work of a community that cares.”
“Au contraire,” another reader responded, “a miracle, indeed.”
With the latter, a wave of frustration and embarrassment washed over me.
I let it go, but not without first wondering if I should reconsider my stance.
Until yesterday, I hadn’t given it much more thought.
Since the news broke earlier this week, I’ve been following the story of the three women who’d been held captive by Ariel Castro for the past ten years.
In this HuffPost article chronicling the events that followed Amanda Berry’s escape and the 911 call that ended a decade of torture, both phrases “Miracles do happen” and “prayers have been answered” were used by commenters.
An outcry rose from my gut, an effort to protect the many thousands of parents whose children never did or haven’t yet made it home.
I could hear their wails, “Where’s my miracle?” and “Why isn’t God answering my prayers?”
So many grievers who are newly on that yellow brick road, the journey to healing.
Aurora. Boston. Sandy Hook.
And the countless stories that never make headline news. Those family and friends who don’t have the support of a country raising funds to help cover medical and other expenses.
Those millions who weren’t in the wrong place at the right time, who aren’t being afforded a literal world of help and assistance.
Now, please don’t take that the wrong way, because there is absolutely no doubt that they, too, are suffering tremendously.
That’s not the point of the statement.
It’s about the suffering, the survival, and how we put into perspective our individual circumstance.
That is what the grieving process is about, compartmentalizing and reconciling every academic, emotional, physical, social, and spiritual conflict that is attached to the loss.
For, when we are finally able to put all those pieces of the grief puzzle together, when we are no longer held back from living our best lives, for then, and only then, will we know that healing has happened.
From the inside out.
We all grieve and live and expect different things from this life.
And though we have many similarities with others living with sorrow and suffering—as I say, “We are neighbors in grief and allies in healing”—our circumstances are uniquely ours.
In the midst of an inner protest against the exclamations of joy surrounding the return of three missing women, I paused to reflect on my own feelings.
I pulled up my online, Encarta Dictionary and typed those seven letters.

Miracle has the following three definitions.

And now I am at peace with Miracle.
Berry’s astute, calculated, risky, desperate, defiant, bold, and courageous escape from a man she has feared for nearly half her life is both amazing and marvelous.
The fact that she never gave up hope is inspiring and moving in immeasurable ways.
Though I do not believe God had a plan for these girls to be captured, tortured, and eventually set free as some symbol of His goodness, that doesn’t mean others can’t disagree.
But I will no longer argue this point, Friends: Miracles do exist.
Miracles exist in lost dogs who find their way home.
In rescued people.
In the union of egg and sperm.
In flowers that grow and bloom from tiny seeds.
In a beating heart.
In mighty oaks that rise stories high, from a small nut.
In airwaves and electricity and electrical current and rainbows…
In Man’s resiliency…
All we have to do is recognize those moments when they flash before our very own eyes and to marvel at the goodness they bring.
One of the greatest miracles of all is this: We are born with everything we need to heal from life’s brutality that occasionally comes our way.
We not only have It, we have the privilege to make It work for us, to sculpt our lives into whatever we want them to be after death or despair.
You can Heal it your way, Journeyers, using all of the beautiful resources you have, both inside and out.
Isn’t that beautiful, and miraculous?
What about you? Have you ever thought about the use of the word Miracle? How have Miracle and Prayer played out in your life?
Hugs and healing, Journeyers…
Soon…