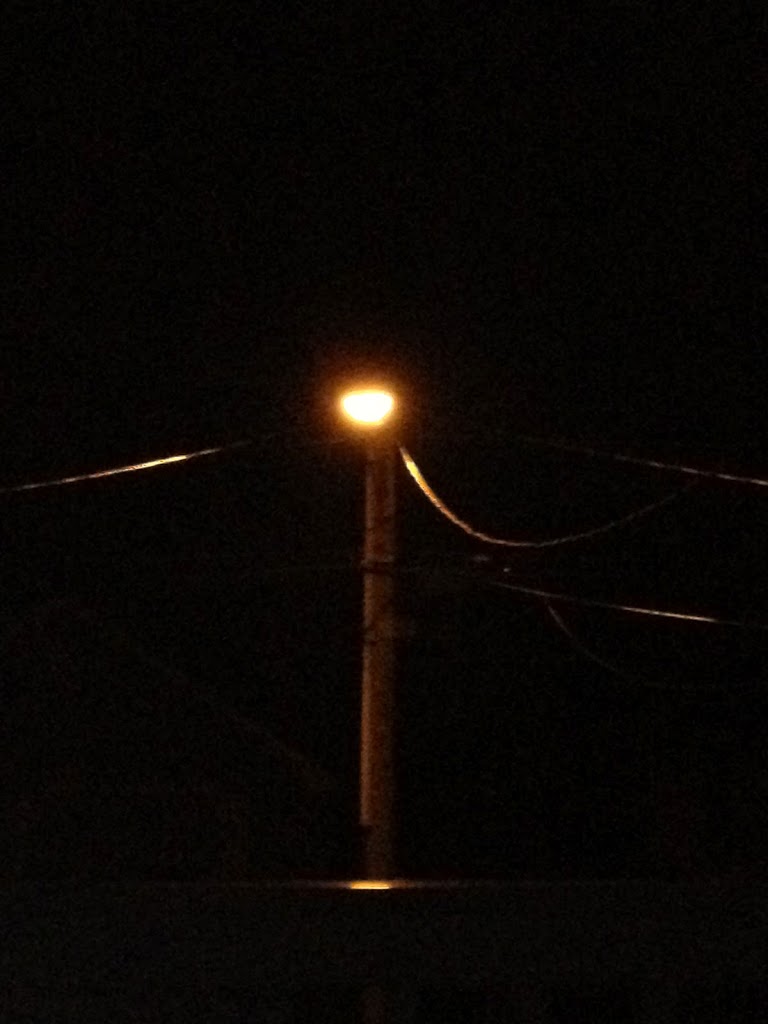 Across the road from where I sit, the street light flickers on and off, as it has been since our arrival three days ago.

“Dumbledore’s there,” I joked, “watching over us.”

I am at the beach. On vacation. With family and some close friends.

On Thursday, my friend and I treated ourselves to manicures and pedicures before beginning the process of shopping for a week’s worth of food and supplies.

On Friday I stood in my hot kitchen, boiling eggs and chicken and macaroni, baking brownies and gathering together the endless other items we’d be taking.

Why would I slave over a stove when it’s 98 degrees outside and 100 or so in my kitchen?

Because I’m going on vacation with my family, which means I don’t want to be a slave to tedious details while I’m there. So I prep everything in advance.

After eight hours on the road due to heavy shore traffic, a tail light that decided to snap loose from its housing, several potty and one lunch break, we finally arrived, unpacked, and put our feet up about 7:30 on Saturday.

Yesterday we spent a wickedly hot day sunning on the sand and frolicking in the refreshing waters.

I woke early today, quickly showered and stole downstairs to grab my laptop.

The universe led me there, then prompted me to click on @cleoeverest.
In between family bonding, beach bathing, eating, cooking, several Euchre games, and a mile long walk along Ocean Boulevard, I managed to power through every single post.
Every single post, beginning with Love Can Lead You to the Truth—Entry #1.
Cleo’s writing is raw, her story of living through infidelity poignant.
There are so many similarities, it is as if we have shared parallel lives, juxtaposed against two different backdrops, hers jet-setting across California and mine cradled in the simplicity of a Northeast valley.
But then, we all have moments where our lives seem to be moving in tandem, where random strangers seem to be mimicking our past or completing our sentences.
Bequests from the universe, sent to offset our troublesome times.
As I walked with my friend, I told her about this blog I’ve been devouring today.
She expressed how she can’t bring herself to read “stories like that.”
“How does it make you feel after you read them,” she asked, “do you feel depressed? Are you trying to find something?”
“It depends, but most times I feel hopeful. There are so many people who aren’t sharing their stories, and for me, those stories are what help to affirm for me that I’ve been on the right path, or to lead me to some new level of healing within myself.”

“I’ve accepted Gavin’s death,” I say to her, “so to that end, I feel like I have so much to teach, so much to offer others who are in search of healing.

“With Warren’s affair, there’s still something that I haven’t reconciled yet, so with that, yes, I guess I am still searching for something.”
That something is a connection to the piece of conflict that still remains, the thread that hasn’t set me free from anger, and if I’m being honest, a bit of bitterness.
Though I must say that, since I began taking the antidepressant, I feel much less tension and my life feels much less chaotic.
Tonight I sit in an entirely different darkness.
At three a.m. I am writing from a New Jersey balcony, half a mile from the shore.
Crickets and an air conditioning unit are the only sounds I hear.
Not far away is the soothing sound of waves rolling in and then heading back out to sea.
The air is refreshingly cooler than it has been in days.
Interestingly enough, I discovered as I powered through her story, Cleo left her Jersey home less than a year ago… Above me, the moon weaves in and out of a patch of clouds.
A post has been incubating for two weeks now, and I have to admit that I am a bit in awe (and a tad green with envy) at how writers like Cleo and Pauline take the time (for we cannot make time) to write on a regular basis.
But I am here, now, and that is what matters.
There is no Dumbledore watching from the now-dark post.
I know that I must create my own magic in this universe.
We must wave our own wands, weave our own spells to acceptance and peace within…
Just like the flickering street light and the fading moon, life is not static…
Every day a new story begins…
Soon…