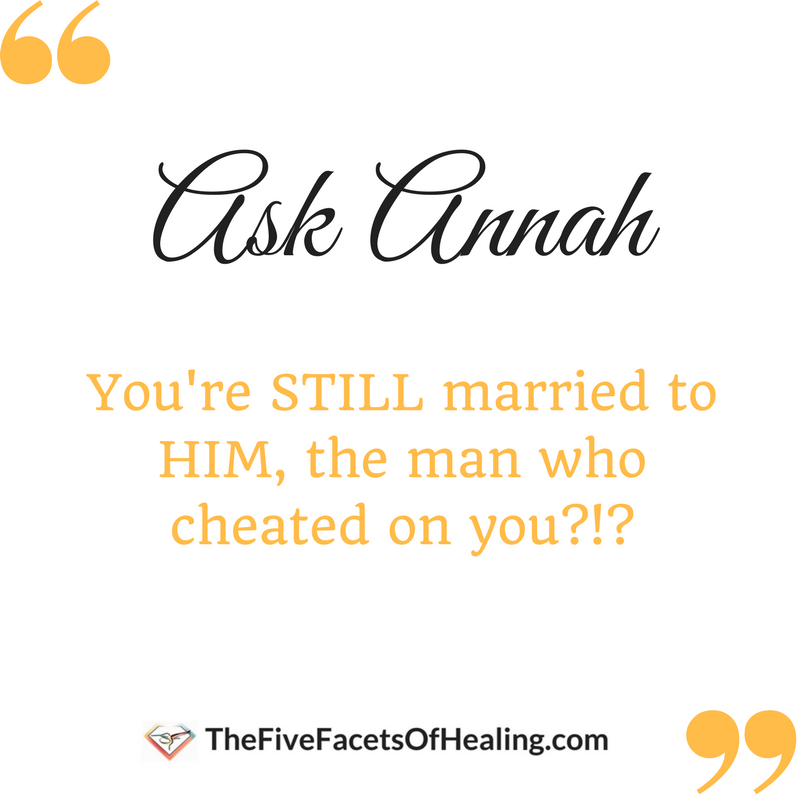 Many people enter a state of disbelief when they learn that I am still married to the man who had two affairs following our wedding vows.

And while some just can’t seem to wrap their brains around it, others have appeared flustered or fustrated, while one person wrote a scathing comment that basically described me as the reason women have low self worth and allow themselves to be victimized.

The confusion enters into conversations across all venues.

I was once presenting The Five Facets Philosophy on Healing™ at a large conference. Since my work focuses on all loss events and infidelity is part of my personal experience, this is one of the examples I loosely weave into the discussions.

During one part of the presentation, a participant blurted out, “You’re STILL married to HIM, the man who cheated on you?” She immediately dropped her chin as if in embarassment, as if the words had somehow taken possesion of her voice in the packed banquet room.

I’ve addressed these reactions individually, with friends and strangers alike, since my husband’s first affair twenty years ago. I receive e-mails from people who have read Digging for the Light and want to know how to survive their own infidelity story.

I’ve even had a couple of women reach out who, themselves, were The Other Woman, and wanted me to know and understand their own personal struggles.

It’s a little discussed topic and it’s high time we pull back the bed sheets and get real about infidelity.

Will Smith once said something like, “Divorce isn’t really an option” and I remember the relief I felt when I heard him express the sentiment; not that he mentioned or eluded to adultery in any way, but that he understands that relationships require a great deal of effort, that marriage is a commitment requiring us to consider the many, many options at our disposal during times of strife.

I knew I had to exhaust all possiblity before I made a decision to end my marriage.

Here are a few select responses to your burning question.

After the first affair, I blamed “It” on all the strife in our life: our child, Gavin Michael’s death; two miscarriages; two more complicated pregnancies; a budding family business and differences in those family opinions, beliefs, and goals, just to name a few.

It was all the stress, we said to ourselves.

“Everyone makes mistakes,” I told everyone who would listen,”some of them bigger than others, but we all deserve the chance to make amends, to be forgiven, and the right to learn and grow from those errs.”

We had two living children and a third due in less than two months.

My spouse chose to tell The Other Woman that he wanted to make a go of his marriage.

And we worked to pick up the pieces and to reassemble them into something new.

I’m not going to sit here and tell you it was easy, because it was hard. HARD I tell you. F-N painful and uncertain and scary as hell.

I cried and screamed and feared everything imaginable, but at the end of each day I knew that we were both trying.

I have this sign in my office, one I take to all of my workshops:

Two years later, when I noticed Warren and I walking hand in hand into the grocery store like fresh lovebirds, I knew it was all going to be worth it.

We worked hard, independently and together.

One of my greatest hurdles was putting aside the notion that I was somehow responsible. Even though I said the “right things,” that I knew it wasn’t my fault, deep down inside a part of me believed that I somehow wasn’t pretty enough, smart enough, whimsical enough, sexy enough or any other adjective you might attach to someone’s worth.

It was years before I fully internalized the truth. Nine years to be exact.

The day I accidentally stumbled upon his second affair I knew that my husband’s extramarital affairs had nothing to do with me and everything to do with his own insecurities and conflicts.

In that moment (okay, a few hours after I stopped screaming and bawling my brains out), I knew many things.

He had to decide he wanted to change, without my prodding and without my offering solutions.

I wasn’t going to make a rash decision that might ultimately trade one problem for an even bigger problem; my biggest concern was the financial fallout of running two households.

I made the decision to watch and see what he did in the name of “making things right.” “One of these days something is going to happen and I’ll know what I need to do,” I would say.

We struggled over a cell phone that gave me peace of mind when I needed to reach him, yet made him feel like he had a tether around his neck.

We struggled with self blame and blaming one another.

When I thought about my sons I worried that I was sending the message that it is okay to stray outside of a marriage and I feared I was modeling acceptance of such behavior for my daughter.

At times it felt like a no-win situation: If I left, would I be teaching them how to give up?

This second trial was as hard as the first one, maybe even harder because now we were getting to the root of the issue, as opposed to seeing the surface smokescreens.

You know how your house turns into complete disarray when you’re doing a deep clean? It’s that old adage “It gets worse before it gets better.”

Our skeletal and spiritual baggage were strewn all over the house and we tripped over them many times.

One day Warren answered his cell phone from atop a scaffolding with a telescoping paint brush in one hand and a paint tray at his feet. That was the moment I had been waiting for, a foretelling moment of the future. It was my “It’s going to be worth it” sign.

Something so simple like the answering of a flip-style cell phone under highly difficult circumstances told me that on some level he not only understood my needs, he cared enough to make the seemingly impossible, possible.

If you’re here because you’re looking for your own lifeline, may you know the love, light, and beacons of hope I send out to you, wishes that you, too, will find what is right for you.

Regardless of what brought you here, you might also be interested in On Marital Discord: Tips for Staying Together in Spite of Strife.

I leave you with one parting thought, Neighbor. My nephew and his new bride asked their wedding guests to write marital messages onto stones they’d provided. I thought about all of the hackneyed phrases about wedded bliss but none of them felt right because what they were really asking is for us to provide those “secrets” to long and successful marriages. 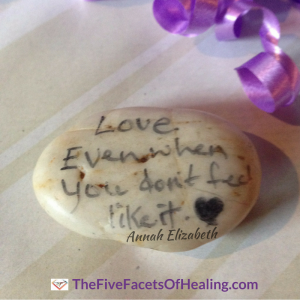 I thought about my own marriage and the difficulties I’d faced. I realized that one of the things that had gotten Warren and I through the difficult times and what may well have been at the root of Will Smith’s statement, was that we kept loving. “Love, even when you don’t feel like it,” I wrote in permanent marker onto that rock.

Love, Journeyer, even when you don’t feel like it. Even though it may be a difficult one, it’s a great place to start.