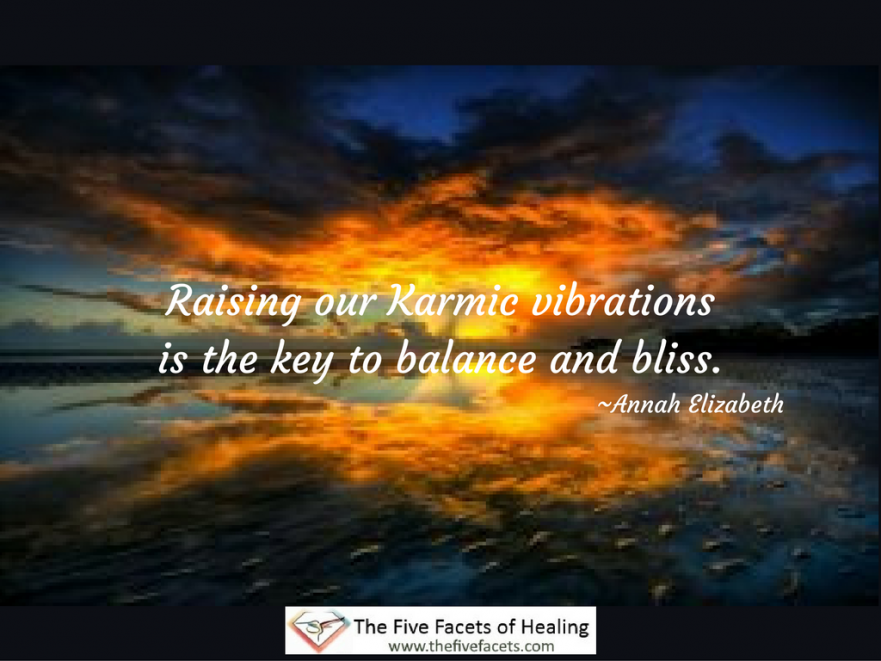 Today I came a cross an unfamiliar quote from Sandra Bullock, one of my favorite actresses,

“I’m a true believer in Karma. You get what you give, whether it’s bad or good.”

This past summer I worked with a life coach who helped me understand some of the negative “karmic life patterns” that are a part of my genetic code, or Human Design, as we call it.

I’ve been thinking a great deal about that statement in the time since we chatted over Starbuck’s iced green teas, and now I ponder his words again.

I find it both ironic and a little unnerving that Karma is most often attributed to “the bad stuff.”

Think about it, when you’ve used the old adage “What goes around comes around,” has it been in reaction to a kind deed or a mean-spirited action?

How many times have you heard someone say, “She’ll get what’s coming to her, in the end” or some version of “Hope that doesn’t come back to bite me in the ass.”

Whether we know it or not, we are not only referring to Karma, we are emitting a desire for punishment that will somehow serve our own sense of vengeance, retribution for some wrong doing toward us or others.

As someone who chooses to connect with people wherever they are in their race, religion, sexual or political preference, I always try to live by The Golden Rule: Do unto others as you would have them do unto you.

Wayne Dyer once said, “How people treat you is their karma; how you react is yours.”

Turns out that my reactions to feeling rejected, which is the Borderline Personality Disorder tendencies that are a part of my makeup, are what have been causing bad Karmic patterns in the relationships with certain people in this lifetime.

The fear response–that I’m not good enough, am being abandoned, will be alone, am not worthy, etc–is so quick it hits me and anyone in my path before you can spit out those two syllables that are Kar-Ma.

I’ve been working hard to recognize the emotion before it erupts and what I can honestly say is that the more we practice something, the easier it becomes.

The lower vibration energies of envy, depression, fear, anger, and revenge deplete our energy and hold us hostage simply because emotion is contagious.

Think about all the times someone else’s negativity has brought you down or ruined your mood. Sometimes you feel like you are moving through sludge.

Some call it The Law of Attraction (LOA) or use expressions like “Hate begets hate.”

In the end it is nothing more than lower vibration Karma. 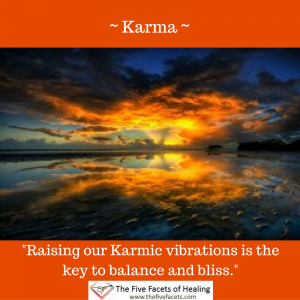 [Tweet theme=”basic-white”]Raising our Karmic vibrations is the key to balance and bliss.[/Tweet]

Like my Golden Rule mentality, Actress Megan Fox says, “I try to live with the idea that karma is a very real thing. So I put out what I want to get back.”

But how do we do that when so much of what we see and hear is negative?

We pay attention to everything.

We begin paying homage to the positive side of life.

We aim to notice every simple, quiet, or faint object that crosses our path.

When we see that budding rose, a flitting cardinal in the dead of winter, or anything that make us smile, we hold on to them.

When we see those moments that warm our heart, the Daddy sitting on a breakfast cafe bar stool next to his little girl on Father’s Day,  we hold on to them.

When we see something that makes us giggle, we hold onto it.

These are the higher vibration energies that feed our soul in ways that inspire, motivate, and energize us.

In my Master-Instructor IET® training last weekend, the trainer informed us that as a general rule our society’s mass-consciousness walks around at an energy vibration level in the lower two-hundreds.

The vibrations of joy and peace range between five-hundred and six-hundred.

Paying attention to things that make us feel good raises our positive energy by two-fold!

When we’re in a higher state of existence, we are better able to be well, work well, and do well simply because we feel lighter and freer.

We humans aren’t really equipped to remain in a constant state of euphoria and the biggest reason is that challenge is always an opportunity for personal growth.

Recognizing both sides of our karmic nature allows us to live in a greater state of harmony.

I’d love to hear your stories or thoughts on how Karma has played a role in your life, Journeyer. Say something in a comment below!