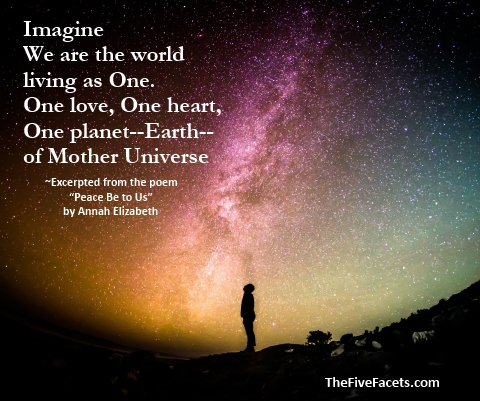 Toward the bottom of this post is an original poem of peace; one penned for Us, for our World… Please read to the bottom, then share…Together we can heal a world of hurt…

As I think about this Happy Happens post, I can’t help but reflect on the unrest I hear our country is facing right now.

I read a social media post from one of my global neighbors yesterday, writings that talked about violence and oneness and pain and suffering.

It made me realize that I have shut out much of the world’s negativity this past week.

In other words, I haven’t paid any attention to the news headlines. Not in print. Not in digital. Not in audio. Not in visual.

I realized that what I HAVE paid attention to are the random sidebars that talk about positive things.

Stories of Olympic athletes’ drive and determination and delights in their success.

A story from fellow blogger, Sharon Greenthal, on the many value-added-benefits and rewards that come with The Empty Nest. This piece mirrors my own thoughts that The Empty Nest is a sign of our parenting success! Don’t let the title throw you off as the it stemmed from her initial reaction to her little chickadees leaving home, but the growth and awareness she experienced are where the meat and potatoes of this piece lie.

Speaking of meat and potatoes (or just potatoes), during Fave and Whirrel’s visit, I learned many new things about eating clean. Fave said that two weeks after they began a vegan diet his scalp psoriasis disappeared.

Like him, I only  developed this condition within the past two years and I’m all for trying anything to rid it from my head. Curing this awful issue will certainly make me HAPPY!

As such, I was drawn to stories that include healthy recipes, like this delicious quinoa dish.

I walked myself and Patches every day, soaking in the sunshine, colorful wildflowers, beautiful breezes, glorious birdsong and flitting butterflies.

I practiced my new Integrated Energy Therapy® skills and studied some more about healing crystals.

We had a family gathering around a bonfire Friday night. Complete with marshmallow, graham cracker, and a cocoa wafer.

But mostly I spent the latter part of the week following my son’s departure writing a new post, taking a class on Human Design, doing some research for updates to our website and collaborating with some new folks I met online.

I usually don’t have to go looking for negative news because I see and hear everything, but this week I seemed to be happily ensconced in a world of positivity.

My friend’s post led me to ask Warren as we were cooking dinner, “What’s going on in the news this week?”

An avid talk radio guy, he was able to sum it up, “What’s in the news today is all about the five cops who were shot yesterday.”

When I asked what prompted the brutality, he said something about racism and riots…

Journeyer, as someone who is powerfully empathic, those two words told me everything I needed to know about our nation’s climate outside of the quiet little world I’d created during the week…

Upon hearing them I felt pain in every fiber of my being.

I don’t want this to become some political post…so I will stop here and try to follow in some of the greatest peace visionaries’ footsteps.

Their stories, songs, and dreams about world unity guide me as I craft this poem.

May the finished form light a lyric in your heart. 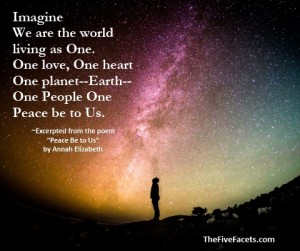 Peace Be to Us

One love, One heart,

pianos to one fork;

We are the World,

Born of love We

We are the World

united We are victors

leaders of but one

One love, One heart

Peace be to Us.

When we watch and read and listen to those hate-filled. brutal or bloodstained news feeds ad nauseam, we take on that negative energy and subsequently send those vibrations back out into the world.

When we  hone in and spread those negative news slants ad nauseam, we send the message to every single media outlet that painful, violent, and wretched reels are what we want to see and hear and read.

When we are spewing frustration and disagreement and loathing and pointing fingers, we are sending back out that negative energy; we are fulfilling that prophecy.

In the same regard, however, Love begets Love.

Journeyer, what do you say we start spreading love. See the news once and then turn our attentions to spreading peace.

Share a positive article. Leave a little extra tip for that waitress who seems to be having a hard day. Send flowers to a shut in. Mow your sick neighbor’s lawn, or in this current drought, water her flowers.

When we tune in we drive ratings, which draw advertising dollars, which feed the machine that is global awareness.

Let’s change the channel away from the monster we have created and begin a new story line.

I can honestly say this practice has fed my happy and positively enhanced my life on more than one occasion.

Peace Be to Us, Journeyer.