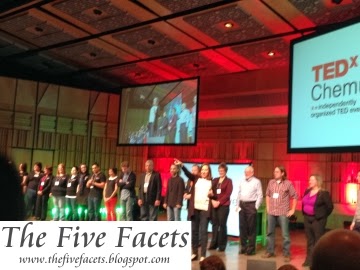 Yesterday, I spent a gloriously exhausting day at a TEDx event, where I met with many wonderfully new and exciting ideas and people. One speech brought together those two entities in the form of a single word: Paesano.
Paesano, as he told us, literally translates to countrymen or villager, but the truest essence of what it represents is friend.
Not the “Like” me on Facebook fellow you see in a million posts and images that say: “You should’ve been there!” or the “Liked” person whom you only speak to when you run into her at the grocery store or your child’s school.
The paesano is the person who was actually there, sitting beside you on the beach, at the bar, in the stadium, the funeral home, or the Fun House at the fair.
The paesano is someone you can and will go to when your child is affected by a lice outbreak in school and you have to treat every square inch of your home to prevent further infestation.
The paesano is someone you can and will tell your greatest fears to, one with whom you’ll share your greatest hopes and dreams, your unabashed silliness, and your least and most reverent thoughts. ﻿
﻿
Of the many people I connected with at this event, one was a paesano of nearly two decades, and there seemed to be a spark with four others, a glimmer that may or may not lead to that lifelong kinship.
But no matter how those relationships develop or where they take us, one thing is for certain: They were an integral part of the Moments that nourished my happy…

﻿
Here are the other week’s highlights: “I wasn’t here when you got the news,” Warren said as he handed me these gifts, “but I wanted you to know how happy I am for you that you’ve been accepted to speak about your work.” He’s one of my longest standing paesanos and exudes other qualities that exist in those types of lifelong bonds, like a willingness to learn and grow and adapt with our loved one when life shifts the foundations upon which she have been living…
Smiles were delivered as another card in my mother’s fun and heartwarming Soon-to-be-50 series arrived in my mailbox… And during the mother-son bonding that occurred as Big Guy and I worked to create and build a better habitat for his turtle, Squirtle… This young man has had a fascination with turtles for as long as I can remember, and sister Beauty thought of him when she found this young creature, one that wasn’t much bigger than a fifty-cent piece when she brought him home for her baby brother.
I’ve always hoped that my children would grow up to be paesanos, that they’d count each other among their treasured friends to share life’s many moments, be they good, bad, or indifferent…
Squirtle is a simple demonstration of that type of bond…
And speaking of Big Guy, I was honored and proud to sit in attendance as this young man’s hard work and dedication to community, character, academics, and leadership was rewarded by an induction into the National Honor Society.
﻿ I’ve tried to refrain from posting pics of my children all these years, because I want to respect their privacy, and yet, they are some of the most important people in my life…
From here forth, I’m going to trust that some day they will appreciate these living journals, that hopefully these posts and messages may eventually serve them in some small way, just as they’re serving me and you, my comrades in this online community…
I was also paesano to myself week, as well. You see, other than laundry (we have to have clean underwear, now don’t we?) and doing the dishes, we haven’t touched any other household chore in three weeks.
The grit I kept picking up on my bare feet was really beginning to annoy me, as were the two large bags of rotting apples, fruit that was fresh when Warren picked them from our trees two weeks back so I could make homemade applesauce and pie filling.
I was beginning to do what so many of us do: pull out the hammer and berate myself because I wasn’t keeping up with Emily Post-style standards, and I was feeling like I was behind and would never catch up.
When I don’t let things like obligation get in my way, I love cooking and being in my kitchen. It’s probably my favorite room of the house.
So, rather than continue to feel all icky, I decided on Tuesday to take the timeto take care of those apples. I now have five quarts of applesauce and two batches of apple pie filling in the freezer, deliciously warm Moments for a future, cold winter’s day. Keeping that momentum, I asked Hubby if we could attack the housework after dinner and concentrate on the things the House Helper did when she was here.
In less than two hours, Warren and Big Guy and I managed to clean both bathrooms from top to bottom, scour the kitchen, sweep and mop the floors, clean and dust all tabletop surfaces, broom off the deck, and put away the baskets of laundry that had taken up residence on the sofa.
Last but not least of the moments that brought me joy these past seven days is this zany Subway employee who dresses up like a sandwich and dances on the sidewalk to support his job, both literally and figuratively, I’d presume… I see him at least once a week as I drive by the intersection, and his enthusiasm as he bounces around always draws a smile…

What about you? What Moment(s) nourished your happy this week?
Soon…