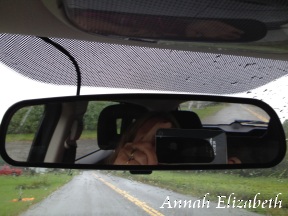 “You’ve got to quit looking in the rearview mirror.”

Last June, when I was feeling overwhelmed by the Hamster-Wheel month and a little depression, I had my first appointment with The Therapist.

I told her I needed to work on figuring out the cause of the ongoing anger and conflict I seemed to have regarding my husband’s affair nearly six years prior.
I explained to her what I’d already been doing and that I needed some outside help in resolving the lingering strife.
I was disappointed when she strongly encouraged me (at the beginning, middle, and end of the hour) to consider couple’s counseling versus individual therapy, and that, No, she couldn’t do both.
I let fear guide my decision.
Fear that my logic wasn’t sound. This woman was, after all, the expert.
Who was I to challenge her thoughts about what was best for my healing?
So Warren came with me to the next appointment. Six weeks later. The first opening The Therapist had.
Forty-one days is a long time to wait when you have a burning desire to work on what ails you.
And sixty minutes is a millennium when you are sitting with someone you feel is unsympathetic.
“You’ve got to quit looking in the rearview mirror,” she said at least a half dozen times.
“You have a husband who loves you…who has done what he can to alleviate your fears…who is remorseful for his actions…”
Now. I do know that Warren loves me, without doubt. She knew this.
I’d also told her—in our first appointment—the steps he had been taking to reestablish trust.
The first two of her comments above had been substantiated by both Warren and me.
The remorse? Well, I’m not sure where she pulled that from, because guilt was not discussed with her at any point.
Not to say Warren didn’t admit regrets in the aftermath of his second sordid dalliance, because he did.
“You’ve got to quit looking in the rearview mirror.”
Tears streamed down my face as I tried to convey to The Therapist that I knew this; that’s why I had come to her for help in the first place.
She asked if we spent any time alone together, and challenged us to a date night.
Classic couples counseling.
And just like that, our hour was up.
“Let’s see what Warren comes up with,” she said as she opened the door to show us the way out.
I doubted she would remember our conversations after a seven week lapse, the next available opening.
I was frustrated by her actions, words, and by the long delays before we could get in to see her again.
But I was willing to give it a whirl.
I had nothing to lose and everything to gain.
Warren and I went out on a date.
It was okay. Somehow being instructed to set a romantic rendezvous undermines the spontaneity of it all; doing something out of obligation makes crispy the soft edges of an engagement that would otherwise stem from a place of desire.
We weren’t with The Therapist long enough for her to discover that we do take advantage of every possible moment for couple-time.
It might be a trip to the grocery store and dinner at Sam’s Club, or a round or two in the hot tub, but we do take time to be together, just the two of us.
Dedicated participants that we are, however, we put our trust in her, scheduled alone time, and then patiently waited for our next appointment. Forty-one days out.
Only to have it canceled five days before our appointment.
“You have to quit looking in the rear view mirror.”
When I acknowledged my fear of not being in control, of having no say, whatsoever, whether or not Warren has another affair, I asked myself this question: Can I accept that I have no power over his choices?
Yes.
The answer came deep from within me, from the area of my angry liver.
To date I haven’t made a new appointment with The Therapist, though I have been on a waiting list with one of her colleagues.
In the meantime, maybe I should pour over some of my old journals, and revisit all of the wisdom I gained during my time with Hank, my counselor from years ago.
That mirror might well be one worth looking into…
Take another look at the photo I took for this piece.
What do you see?
In order to move forward, mustn’t we be cognizant of where we’ve come from?
If we bury what’s in the rearview mirror without reconciling the conflict it generated, then we cannot be at peace with it.
In the absence of that harmony, the discord will likely return during a future growing pain.
With a vengeance.
In that regard, I disagree with The Therapist.
We’ve all been there, looking at what’s behind us…

What does the expression mean to you?

What are your thoughts about, and experiences with, looking in the rearview mirror?
Soon…