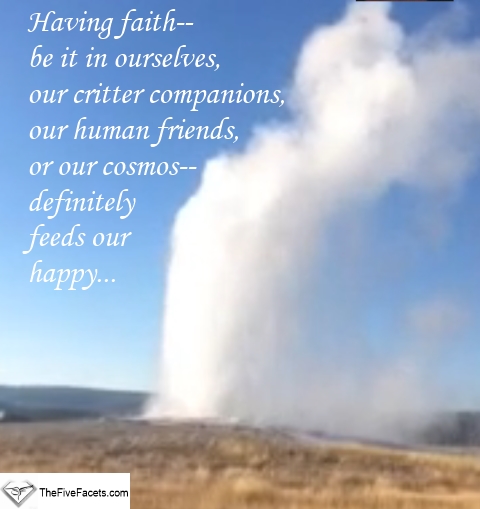 Fall is here in all her glory, Journeyer. Faithful as the day is long.

Warren has been gone eight days now, doing some work and a little R & R out west. Two training camps with a few days of hunting and fishing in between. And sightseeing. On Tuesday he made the nearly four-hour trek from where he was staying to Jackson Hole and then on to Yellowstone National Park.

My parents took us kids camping there when I was a youngin. I have a vague recollection of seeing Mount Rushmore and remember the tales of a bear breaking into our station wagon, but that’s the extent of my memories. His fall beard makes him look like a mountain man!

Thanks to today’s high tech gadgets, and Warren’s willingness to try an iPhone, we were able to watch the seven-twenty evening show of this most reliable geyser, together. Him there and me several thousand miles away in my office. While there he came across several other spout locations, but this one, they say, is the one that appears the most regularly. I’ve spent this time that Hubby has been away catching up on the Grief Diaries series of books I’m co-authoring and the couple I’m contributing to.

I ordered Halloween costumes for Warren and me. I’ve always wondered what I’d look like with black hair and now I get the chance to do so in my Cleopatra costume! Warren is going as a Pharaoh. This should be a really good time! Beauty doubted that her father would wear a “dress,” but little did she know he’d already agreed to it! The Empty Nest is about to get even more real…and FUN!

I had two other surprises this week, Journeyer.

Big Guy sent me a text on Wednesday asking what we were doing this weekend. He had no clue his dad was out of town. Turns out he also hadn’t realized sooner that he had a long weekend and didn’t have to report to class Monday and Tuesday.

Thursday morning I decided to check out a dog who’s been at a local shelter for quite some time. I saw her late in the summer and she was still there a week ago when I popped in to drop something off to Beauty, who does some work there.

That pooch stayed on my mind all week, something that rarely happens. Soooo…I decided to inquire about her and to spend a little time with her. We went for a morning walk on Thursday and a longer one on Friday. At first, she had absolutely no interest in me whatsoever. She walked fine on her leash, but I was nothing more than a pair of legs to take her somewhere, anywhere but the cage she’d been in for almost two months.

I was encouraged by her enthusiasm of the kennel workers, though, and on Friday we went for a longer walk and then sat on the steps of an old abandoned building for a while. That’s when I finally made eye contact with her. I saw straight through to her soul. That was the end for me. Whereas I’d planned on visiting her for an entire week, I decided to go back and adopt her Friday afternoon. Based on what I knew about her disposition, I decided to take her with me on the two-and-a-half hour trip to pick up Big Buy. She laid on the doggy bed on the passenger seat the entire time. I had sent photos to Warren (who had given me his blessing regarding a new family pet) and the kids. Big Guy’s dorm resident asked if I’d bring her in to visit her and the few students who weren’t leaving campus during the break.

About seven college kids swarmed this little gal, who soaked up every ounce of affection. I’m guessing you can tell by the photo that she has some Pitbull in her. My very first dog was a Pit mix and, honestly, never was there a more loyal, kindhearted, and trusting dog. Their extreme loyalty is what allows unscrupulous people to use them for bad. Two girlfriends and I took her with us to an outdoor gift and produce market an hour away. Seems I have a little work to do helping her adjust to other animals as she becomes quite excited in the presence of other dogs. She’s also scared the daylights out of our indoor/outdoor cat. If you or someone you know has some tried and true tips for socializing a dog, please send me links! I’d be much obliged.

The one thing I do know is that this little girl isn’t going back to the shelter, no matter what. She has too many redeeming qualities to subject her to that once again. While I was at the market, I had three different people stop me to ask about her and each of them shared their own stories of pet adoption. The first couple gave me home because they said their dog initially chased their cats relentlessly but now they are best buds. Keeping my fingers crossed!

Having faith–be it in ourselves, our critter companions, our human friends, or our cosmos–definitely feeds our happy. What about you, Journeyer, what moment(s) filled your week with faith, hope, or a little bit of happiness? Share your story below and spread a little assurance.

Until we meet again,  yours in hope,  healing, and happiness,