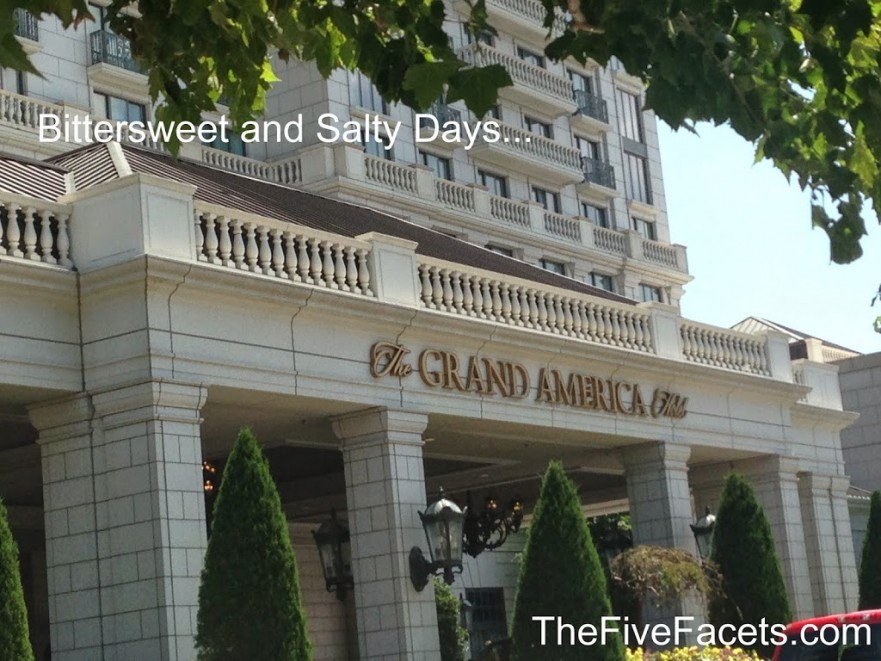 This place is exquisite, from this enormous cut floral arrangement… to the balcony views… to the marble bathrooms… Yep, we’re on the road, again.
This time we hit the skyways to support Fave in his national competition.
After nearly a year of nursing and rehabbing some minor muscular stuff, he’s back on track and raring to be back on the platform.
The really cool part is that the event is taking place in Salt Lake City, where I happen to have a few relatives.
Two aunts that I haven’t seen since my grandmother’s funeral some seventeen years ago.
And honestly, I don’t remember anything about that trip, which is no big surprise given the fact that I was six-plus months pregnant and was fairly certain that Warren and my best friend were having an affair.
That suspicion would be confirmed less than eight weeks after that family gathering.
That’s the bittersweet part, memories that are both painful and pleasant…
Now, flash forward two days, to the Salt Lake City airport, where Warren and I are about ready to catch the red-eye to go back home.
These past four-and-a-half days have both gone by in the blink of an eye, and yet, have felt gloriously relaxing.
After capturing last year’s title, my boy’s performance wasn’t quite what he’d hope for, and yet, he managed to complete four of six lifts and post a total.
A combined score that not only secured him fourth place and points for his team, it also qualified him for the Collegiate Worlds.
A cousin whom I haven’t seen since we were sixteen came with his three children to watch the competition.
And my other local aunt and uncle watched from home.
I was so glad we had a couple of opportunities to spend time with them too, for her failing health may mean this is the last opportunity I will have to see her.
Bittersweet memories and moments in time…
My mom drove ten hours to come and spend the weekend with us.
We stayed with her one sister. And you won’t believe this, but her nickname is Squirrel!
Which is WAY TOO FUNNY given the fact that my friends and family have referred to me as Squirrel for the past few years, and then I recently found out that Fave’s girlfriend is nicknamed that as well…
So now we have Squirrel the girlfriend and Auntie Squirrel.
As nice as that hotel was, I much preferred staying in a home environment, one where I could love on the many neighborhood animals and have an extra incentive to get up and walk every morning. Check out these views that greeted us almost everywhere we went! I cannot tell you how much we laughed, my family and Auntie’s many friends we met. They are a lively and entertaining group, for sure! Why, Auntie had me dancing in her living room to the Bee gee’s live video.
Saturday night fever! Don’t you just love it!
I hope that I inherited my grandmother’s youthful genes the way Mom and Auntie have, for I’d love to be as spry as they are when I’m in my seventies!
Hubby and Son and I went to the Great Salt Lake today.
Both of these boys sink like lead and have always had a difficult time swimming.
Fave was so excited when he went to the Dead Sea a few years ago after an event in Israel.
He talked nonstop about how he could candlestick in the water, which means to stand upright even though your feet aren’t touching the ocean’s floor. Suspended in the Great Salt Lake
The woman at the park told us the lake was down more than three feet, which meant we had to walk a fair distance out before we even began wading into the water.
The stench from the brine flies and the dead ducks was kind of overwhelming, but we weren’t to be deterred. See all those black striations? They are actually millions of those microscopic insects!
A sign told us that the southern end of the lake where we were was fourteen percent salt, whereas the northern end was twenty-five percent and the Dead Sea is thirty-three percent, making you even more buoyant!
If you’re ever in Salt Lake City, you have to check out the lake!
And while you’re there, check out the Saltair event center. This structure is the fourth generation of what was once a booming resort swimming center. Several natural disasters have destroyed each of the first three buildings, the first of which dated back to the early nineteen-twenties.
The current owners have turned the facility into a concert venue that also houses a small gift shop.
The owner treated all of us brave souls, those who actually ventured out into the water to go ‘bathing,’ with our choice of ice cream or beverage.
It was a great way to cool down after being in the blistering heat. 6 pm in the shade!
In other happy news…
Warren and Big Guy built this enormous outdoor summer habitat for Squirtle, our turtle who has grown tremendously in the past year. I met many new people on my recent travels, including the delightful Madeline Torres and her boyfriend, UFC fighter Rick Story. We had several delicious meals at local Utah establishments, including this pizza at the fabulous Maxwell’s Restaurant. Warren carved out this little bit of love at the dinner table one night. And then there was a message from a cyber-friend, @mother_warrior.
Beth is a cancer survivor and someone who comes to mind from time to time.
I cannot tell you how honored I was when she notified me that she’d finished reading my memoir and that it had impacted her life in ways she’d not yet imagined.
And then she left this amazing review on Amazon… Journeyers, I am touched by the impact this little book is having on people’s lives and by the ripple effect it is beginning to have in the world around us…
In addition to leaving copies in random places for some chance reader to find, I’ve been donating copies to groups who might benefit.
Knowing that I’m making a difference in other’s lives is like a buffet for my happy…
Maybe you can help broaden that band of healing by sharing Digging for the Light with your friends and anyone in need.
As The Five Facets slogan says, “We are neighbors in grief and allies in healing.”
Will you join me in helping others? Purchase a copy, or two…or three…and share them with your local women’s shelter and cancer centers and counselor’s offices…or that friend who is having a difficult time right now…
What Moment(s) made you smile this past week?
Until next we meet again, yours in healing, hope, and happiness…
~AE
Soon…
p.s. I’d really love connecting with you on other social media sites and would really appreciate your clicks on the “Like” and “Follow” buttons up there on the side bar!

2 Comments on “A Few Bittersweet and Salty Days”