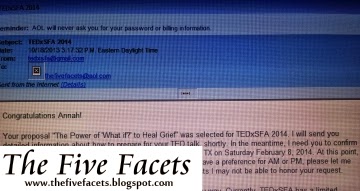 I had the most amazing experience Friday night.

I was sifting through mail, unfollowing a number of Facebook posts because e-mail notifications were blowing up my inbox, and just sort of enjoying a quiet night alone since Hubby is out of town.

He and some buddies have been planning a fourteen-day elk hunt for almost a year now.

In our twenty-seven years together, this is only the second time I can recall that he’s taken a trip for Him, no wife, no kids, no parents, just him and some friends doing their man thing.

Until we sell this house he gutted to the foundation and rebuilt, money is a little tight, and he’d thought about selling his spot to someone else.

But in the end, he took this well-deserved vacation and I’m so happy that he didn’t let Fear or Money or Work get in the way of something he’s been looking forward to for a very long time.

Big Guy had quietly stashed himself away in his room, so it was just me and my computer in a quiet house.

As I was scrolling through—delete, delete, delete—more than six-hundred lines (nauseating, isn’t it?), I paused on the TEDxSFA2014 title.

But curiosity got the best of me and I clicked on the link.

You know how it is when you’re expecting one thing, in this case a blurb about someone else’s fabulous ideas that have made it to a TED stage—a movement I’ve been following for more than six years—and you see something you weren’t anticipating? Motion sort of S.T.O.P.S.?
“Congratulations, Annah,” scan, scan, scan…is this intriguing enough to draw my attention away from the tasks at hand?…scan…”Your proposal, The Power of “What if” to heal grief…” scan scan—WAIT! STOP!—“has been selected…”

I think I read that line three or four times. My hands trembled first, but my legs quickly followed suit.

And then I did what every gal does when she’s encountered something surreal, I picked up the phone to share this with someone before the words on my computer screen evaporated and I discovered it was all just a dream.

I barely dialed the first number that popped into my head, only to learn that my girlfriend wasn’t home.

Not to be deterred, I told her hubby I was about to bust a gut and had to tell somebody my news.

Poor guy. Thankfully he was gracious and did just what his wife would have done, confirmed how exciting all of this was and how great it was that my hard work was finally paying off.

Of course, I phoned person after person, five in all, before I stopped trembling and started freaking out.

I spent a few frantic minutes feeling as if I had only five minutes to write and prepare the speech of my life, as TED calls its TEDTalks, and asking myself things like, What if I’d deleted that e-mail?! OMG, what if I throw up on stage?, and trying to dispel mind chatter nonsense like I have to lose the rest of this weight because the camera adds ten pounds, TEN POUNDS.

Two days have passed and my mind hasn’t stopped spinning about ideas for that talk.

And this morning, when I woke at five a.m. to an instantaneous flood of thoughts, it dawned on me: The only thing I’ll be doing is sharing the same stories I’ve already told over and over and over.

I know every single word, so all I have to do is craft an opening line, fashion a few of these tales into some sensible order, and find people who will let me practice in front of them.

And well, the standing in front of several hundred people part?

Maybe I should look at it like this: What ifI were to imagine that everyone else who gets up on that stage is as nervous as I am, and that I, too, have the ability to give a performance that wows, in spite of that fear…

What if is a question that plays a significant role in grieving.

I’m saving that little epiphany for a future post, but I’ll give you a little hint, come back on Tuesday to read an excerpt from my memoir, Digging for the Light.

In the meantime, if you’ve never listened to a TEDTalk, do yourself a favor and watch a few of my favorites here, here, here, and here.

NOTE: The last one? Four minutes, sixteen seconds. That’s all. I guarantee you’ll never again look at a paper towel without this guy coming to mind.

If you’re as inspired as I am, consider attending one of the greatest events on earth. Find a TEDx event near you. You’ll be glad you did!

And if you’re reading from the Nagadoches, TX area, check out TEDxSFA and watch for their attendance registration to open!

I’d love to meet you in person!

I absolutely love the image they use to convey the topic… Journeyers, this is exactly what recovery is all about!
These words are exactly some of The Five Facets of Healing fundamentals: What if(remember, you’ll have to come back Tuesday for that one!) If you’re feeling stagnant or rutted in your grief, ask yourself what it is that you want and then do something different than what you’ve been doing, do anything, but just do something!
Bust most of all remember that we’re all travelers on this yellow brick road called Life.
Some of the paths before us will be painful and some will be pleasant, but one thing is certain, they are plentiful…
The other Happy Moments that filled my week included:
·         Vibrant fall foliage floating in the air and painting the landscapes around me
·         An electric orange sunrise
·         Big Guy hollering to me, “Mom, I’m heading to practice!,” which, of course, means that he now has his driver’s license and doesn’t have to rely on Mama to get him wherever he needs to go! I’ll say it again: LET FREEDOM RING!
And lastly, I just had this epiphany!!
This month marks the third anniversary of this series (has it really been that long!?), one that began as a way to help us realize that Happiness isn’t some destination, it’s not a Place that we have to arrive by action or bus or plane or train…
Happiness is a collection of all of those moments that make us smile, even those that surface during our most difficult times.
This Happy Happens series is an effort to encourage us all to recognize and accept and pay just a teeny tiny bit of homage to those simple events that tend to get trounced upon by Angst and Anxiety.
As I was recalling those smaller, yet no less significant events from this past week, I realized this: Happy is a thing!
It’s like one of our vital organs…pancreas, brain, heart, happy… It resides in our core, close to our heart, and needs to be protected and nourished just like the rest of our body parts.
It’s like a flower, sometimes it blooms brilliant in our personal gardens and sometimes, when death or disease or destruction touches it, it shrinks away for a while…but the magic is always there, Journeyers, sitting just under the surface of our skin, waiting to shine outward… So, Friends, what about you, how did you feed your happy with this week? Share it here and spread the healing…
Soon…