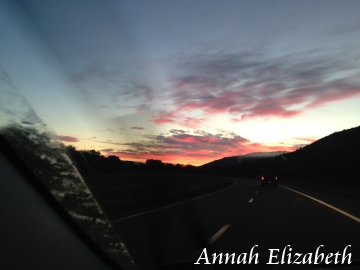 It’s a bit of a whining day, Folks.
I’m not settling in to going back to work very well.
I feel like I can’t catch my breath and as if I’m even more unprepared and harried than I’ve been.
We were late for Beauty’s soccer game today, thinking we had to leave the house at noon, for a match that began at noon.
Seventy-five minutes from home.
Fortunately I noticed our mistake shortly after eleven-thirty, so we at least made it to see that last half.
A headache is claiming my brain tonight.
You know, there are some weeks when we feel as if we’re spinning our wheels or as if nothing seems to be going right.
During those times, it’s hard to recognize the Happy, but there’s always something, Journeyers.
We just have to recognize them.
One of this week’s moments came as I drove to work at that unbelievably nasty hour of six-twenty in the morning.
There was ICE on my windshield, Journeyers, a heavy frost that didn’t brush away with the wipers.
The digital display in my car said thirty-four degrees!
But as I begged for the heat to get cranking, look at the amazing shades of a red sunrise I saw ahead of me. Yesterday, Warren pulled a bottle of soda from the case.
“Hey, Honey,” he said a little while later, “any idea why this cap would be red?”
“Check the case to see if it says anything,” I said, and after he hollered there was no mention, I told him to Google it.
“Hey, maybe it’s a free trip to someplace like Aruba.” The thought alone was joyful, Journeyers, and for a silly, dreamy few minutes I danced around the kitchen.
“We might be going to Aaaar-uuubaaaa,” I sang.
The only reference Warren could find was to a 2009 contest.
I’m still holding out hope, though!
Do you know anything about a current contest? If so, let me know!
Just writing about it is bringing another smile to my face, Friends.
Sometimes, we have to focus a little harder to see the Happy…
What about you? What Moment(s) brought a little pleasure to your week?
Soon…
﻿