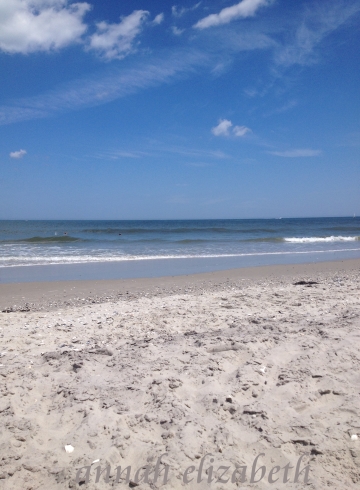 What do you see?
This morning I am in Ocean City, NJ where, right now, there is a warm breeze blowing across the screened porch where I sit.
I’m feeling much better, having washed away the sweat and grime and exhaustion of a night filled with an oppressively hot and still air.
We’re going to the beach early to dodge the height of the blazing sun’s fire.
I’m not complaining, mind you, after such a long and brutally cold winter.
Actually, I was sort of complaining, told Warren that I felt mean and ornery this morning because of my tortured sleep.
After my shower, however, I did close up the house and the windows and the blinds to shield the interior as much as possible.
Proactive is my middle name.
And if that doesn’t work, I think we’ll head to the closet store, purchase an air conditioner and throw a little money at the owner’s electric bill.
Anyway, I’ve been thinking for two days about this post and hadn’t come up with anything that wouldn’t be a near-day-long event.
I don’t know about you readers who are also writers, but assembling my thoughts and ideas onto the page is a slow process for me.
Every once in a while, my genius—Liz Gilbert, mastermind of Eat, Pray, Love says we all have one inside of us—shows up and what makes its way to the page seems to arrive as if on floating wings.
Today doesn’t appear to be one of those days, so I’ve chosen to reprint something from the archives.
I remembered with fondness the experience of writing a post during our time here last year.
As I searched for this piece, I first came across the one I wrote a year prior and almost to the day.
July 2011.
I, like so many millions of Americans, had been coping with depression.
July 2012.
I wrote about how fortunate we are that life isn’t static.
July 2013.
I have wondered in the past few months if I am experiencing another bout of depression.
Having survived the consequences of long term, untreated depression, including a six-week stay in the psych ward, I try to be heedful of any situational depressions that might surface.
If I’m aware, then I can take action.
But the main reason for sharing this writing is for those people I’ve recently encountered who are seeking comfort from this illness.
Those who see only the wave’s dark shadows, the sharp edges of the broken shells, and the scorched, abrasive sand in the photo above.
Depression does this to us, Journeyers, it makes it so we can’t see the whole of life or feel the coolness in the wind and the water and that wish is mere inches beneath the surface sand.
If you are here and you are depressed, if you are looking for answers or help or comfort, please know this: You are not alone.
Yes, it’s cliché.
Yes, it seems like people toss these four words around as if featherweight.
Yes, your darkness is like no one else’s.
But here’s the thing I’ve learned through all of my times of sorrow and suffering, Journeyer, there is a reason that this phrase has survived generations and generations of suffering.
Everywhere we go, everywhere we look, people are grieving.
Some appear happy.
Some appear sad.
Some are closeted in the homes that we walk or drive by on every single work commute.
Each of those beings is on a different path in their journey of loss and healing.
I learned this important lesson many years ago, through my connections with you and with so many others, and it was one of the most rewarding elements in my healing.
It’s such a great message that it has become The Five Facts Motto: “We are neighbors in grief and allies in healing.”
Together, Friend.
Together, yet apart, we grieve.
Together, and yet individually, through sharing and reading and listening and learning, we can—and we do—conquer grief.
We heal…
Hugs and healing, Journeyer…
Soon…

2 Comments on “The Sandy and Soft Sides of Depression”