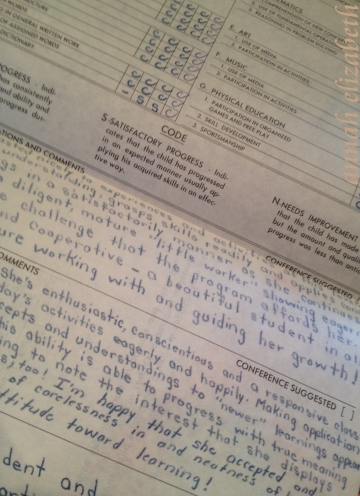 “I have more awareness of other people and, I hope, more sensitivity to their needs. I also find that I’m more direct and outspoken.”
~Christopher Reeve
One of my most beautiful, longstanding friendships has been disintegrating for years now.
Several of them, actually, have experienced varying degrees of altered states.
And I’ve recently come to realize that I‘ve been the instigator of their demise.
You see, I spent the first forty-some years of my life blaming myself for everything.
I don’t know why, but I believed that anything that went wrong was somehow tied to me.
So I only spoke up when unkind things happened to others.
But there was also something else going on that I never understood until recent years.
I have always been acutely aware of other people’s feelings and emotions and needs.
A few weeks back, as I was thumbing through the few treasures I have from my childhood, I stumbled across my second grade report card. This is one of the notes my teacher wrote about that nine-year-old me: “It’s interesting to note the interest that she displays in the achievements of her peers, too!”
This document surfaced just days after I ran my first 5K, where I found myself clapping, pumping my fists high into the air, and cheering on the lead racers who passed me on their last leg of the course, more than two miles ahead of my pace.
“First place!” I pointed my finger high in the air and shouted to the guy who whizzed by me.
As if he needed the tail to tell him he was leading the pack.
“First female!” I shouted at the fourth person to pass me by on the other side of the orange cones.
When people around me are succeeding, I feel celebration in my heart.
When people around me are sad, no matter how they mask it, I feel sadness.
When people around me are angry, I sense the palpitating frustration.
When people around me are happy, my nerve endings do a little jig.
The result of all that awareness was that when people were snarky, I not only felt the anger, I believed I had done something to deserve the maliciousness.
When my (ex) best friend called me every name in the book after I finally uncovered the truth about her illicit behavior with my husband, I challenged the validity of her statements.
And yet, that scared and insecure part of me welcomed Blame into my home and hugged her close.
I’ve been saying since Gavin died that the reason so many of us never overcome the loss of a child, never truly triumph over life’s great tragedies, is that we closet our deepest, darkest fears.
For the past twenty-some years I’ve been trying to change that in me by talking and sharing and listening and trying to learn.
I declared in the early months after my son’s death that I wasn’t going to mourn him forever and that someday I wanted to help heal a world of hurt.
But here’s the thing, there are many people who don’t want to divulge their most intimate thoughts to themselves, let alone speak them to anyone else.
Being tuned in has been as much of a curse as it has a gift.
I’ve had many people tell me how grateful they are for my insight.
But I find myself being rejected by those who are weirded out by my intuitiveness, or those who really don’t want to share their own sensitive sides.
Rejection has always been hard for me.
I love people.
I want to fit in.
I want to belong.
And so I blamed myself, smiled, and backed away into a corner of shame.
But after Warren’s second affair, something in me woke up.
I realized, probably for the first time in my life, that I wasn’t to blame.
Though I knew this, academically, all those years ago, I’m still trying to accept it in my soul…
But that awakening was like a glorious sunrise that just keeps getting bigger and brighter.
I began recognizing the sarcasm and the sneering as both unwarranted and unwanted.
And I began sharing my hurt feelings.
“Oh, you’re sensitive,” people would say.
I didn’t realize it at the time, but I interpreted sensitive as damaged.
As if sensitive is something to be chastised and ashamed of.
In one of the last conversations I had with a friend of nearly twenty years, I was trying to express how I felt when she snapped at me for the gazillionth time and treated me harshly.
“Oh, you’re just so sensitive,” she said.
I’ve known for two decades that I’d rather be vulnerable than calloused, rather be open than continue to be closed off.
My friend told me she was sorry she’d hurt my feelings and that she’d decided to alter her behavior so as not to upset me any more. Moving forward she wanted only to focus on the fun we could have together and for us to eliminate all the stuff that had substance and power and emotion attached to it.
Trish described my feelings so accurately: The remarks felt condescending and I felt belittled.
Later, as I cried for what was slipping between my fingers, I realized just how deep-seated my association with sensitivity was.
I heard my mother’s voice, “Oh, Annah, you’re so sensitive.”
In my memory, there was a sense of exasperation, as if my sensitivity were a nuisance.
As if my very nature was a great source of aggravation.
And it all came into focus.
Firstly, my intuitiveness surfaced at an early age, in an era where it made people even more nervous than it does today.
And in addition to my thin-skinned disposition, I’ve always been a questioner, someone who wanted answers to life’s biggest (and smallest) questions.
Where I don’t remember much else, I do remember wailing “Why?” whenever I came into contact with injustice.
Actually I think I asked Whys about the Whys… ﻿
When we Sensitiveseven hear about wrongs being wrought on others, we feel it.
Our souls plead with the universe and anyone else who we think might have the answers.
Those who might be able to put an end to the evil.
Even as a young girl, I refused to let it go when the answers weren’t delivered to my proverbial doorstep.
Now that I have children of my own, (including a King of Why) I certainly understand any annoyance my mother might have had at my insistence.

You see, when we respond to a query, we think we’re providing answers to the questions asked.

But here’s the thing, sometimes those responses still don’t make sense to the questionner, they just aren’t quite adequate and don’t quite compute, so the wonderer just keeps on prodding and requesting more information, until the reply she receives finally fits, finally makes sense…
It’s hard enough working and raising a family and taking care of us in a world where the walls of Women’s Work and Men’s Work are crumbling.
I can’t begin to imagine living in that timeframe, the one where Emily Post ruled and women were expected to be Superhuman.
Actually, I can.
I’ve often said I was born to the wrong generation, that I should have been born in the 1800s.
“But then, again, I likely would have been hung or shot because I’d never have been able to keep my mouth shut.”
There’s never been anything shy about my tenacity.
And in that echo of my mother’s voice, I had a moment of truth and learning and growth and…clarity. Sensitive isn’t a bad trait.
We’re allsensitive in one way or another.
And it’s not just the negative that makes us weepy. I didn’t see the logo until after I’d accosted the guy holding the bag
“I LOVE the saying on your bag! Can I take a picture of it? And wherever did you get it?”
Edgar Allen Poe said it so succinctly, long before the rest of us were introduced to Hallmark, “Beauty of whatever kind, in its supreme development, invariably excites the sensitive soul to tears.”
Sometimes sensitiveexudes happiness.
Sometimes sensitivemanifests itself as vulnerability.
Sometimes sensitivepresents itself as snarky, sad, irritated, indignant, angry, afraid…
Sometimes it comes in the form of dry, itchy, scaly skin…
And sometimes, like with the clitoris and the penis, sensitive is nothing shy of euphoria.
Like I said, I doubt I’d have survived the early twentieth century…
Weird, yes, but on that note, I can hear Mrs. Doubtfire saying, “We’re all sensitive, Puppets.”
And that’s okay…
Soon…
﻿
﻿