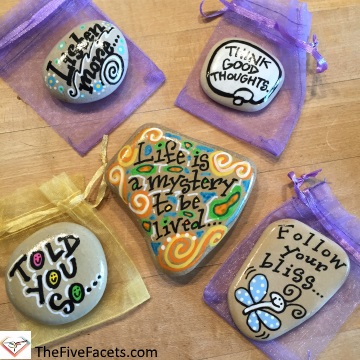 Today I come to you from atop a mountain that overlooks the beautiful Lake Michigan.

Yep, we’re on the road again; this time a pleasure trip to visit family and attend a wedding.

Yesterday my relatives took us to some local street fairs where we picked up numerous homegrown and handmade goods.

You know the type of market, one where you can collect anything from silly or tchotchke to the refined or refurbished to the upscale or unrefined.

What I always love about these markets, though, is that not only is there something for everyone’s taste, the people who are there hawking their wares are usually passionate about what they do. 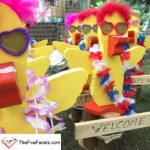 Kelly describes herself as “The Rock Lady,” but she is so much more…oh, so, so much more.

My aunt’s grandchildren had gone to the market with their aunt earlier in the day and excitedly shared the painted rocks they had purchased for their parents.

Kelly’s stand stood out from the few other painted rock vendors, so I stopped to take a look.

Quickly, however, I noticed that what Kelly was doing was so much more than whimsical child’s play. 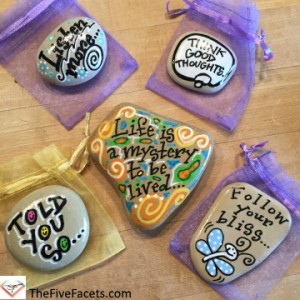 I began picking up stones that called to me, but what I soon discovered was that the messages on the backside of each stone created something so much more important than what is first apparent.

Journeyer, this woman is a type of healer, spreading messages of hope, happiness, healing and inspiration.

While she was placing my selections into colorful netted bags, I spotted the handmade, construction paper sign that had been partially hidden by the rocks people had plopped onto it.

Power Rocks. I think that’s what she had written.

We had struck up a conversation about loss, grief, and healing and she had commented how some people might think what she’s doing is silly but that doing this work means something to her and that it helps her.

Journeyer, she is already fulfilling the fifth part of The Five Facets Philosophy on Healing, creating and living by her own set of Power Mantras.

She is tapping into the expressions that mean something to her and using them on a regular basis as a way to live her best life, even in the face of her adversities. She is creating something meaningful and spreading those messages of hope, healing, and happiness to others.

And she is modeling what living passionately, productively, and purposefully looks like.

When I told her all that, she smiled an enormous smile, Journeyer.

When I handed her the fifth and final rock, she said to me, “This one’s too big for a bag.”

Kelly and I are now connected for life, Journeyer. Even if I never see her again (though I’m fairly certain our paths will cross again during our visit) we share a story, one that is brimming over with peace and light and love for ourselves, our universe, and our fellow man.

Journeyer, I’m super honored to introduce you to another one of our healing allies. 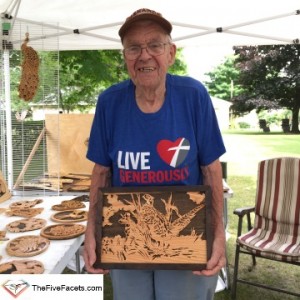 A quiet man with an infectious grin, he sat in his portable chair, just enjoying the day. No pushy sales pitch was needed because his simple art teems with the energy of someone who loves his work.

His collection of wooden scroll work included everything from holiday, to nature, to nursery rhyme.

I purchased a few things, something for friends, myself, and for my new office (YES! I now have an office space).

As I left, I stopped and asked him how many years young he is. A slight smile crossed his face when a passerby shouted for him to keep it a secret.

I told him about this weekly Happy Happens column and asked if I could take his picture to include in this week’s story.

He thought for a second and then told me a story about a friend of his who became “famous” when someone posted a picture of him on Facebook.

He reflected long and hard when I asked him if he had a favorite piece that he might pose with. Then he pointed to “the pheasant piece” and told me another story about a young boy who had once spotted the artwork and asked his grandfather a question that made everyone laugh.

As we walked back to the car, I told my family about Leo. I knew he’d been around a while, but when I did the math, I was filled with even more awe, admiration, and joy.

Leo’s life from Detailer in an industrial business to Designer of a gear that is used in the Space Needle is definitely too big for a bag.

I think that one thing both Kelly and Leo have in common with every person who has ever reached a place of fulfillment and personal success is not only written on one of The Rock Lady’s rock, it’s written into the heavens:

“Told you so… Sincerely, Your Intuition.” 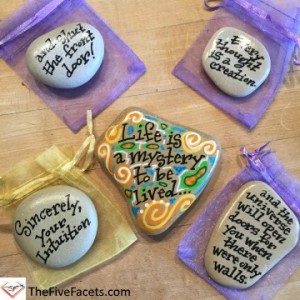 Successful people learn to listen to the whispers and the nudges that are their intuition, to follow their dreams, to learn from their mistakes, to accept what they cannot change, and to let go of those things that are no longer serving some purpose in their life.

Life is definitely too big for a bag.

Life is like an open-ended process, one that is best lived when it can stretch and yawn, a bit like those muscles that grow only after they’ve torn.

Speaking of intuition, paying attention to mine has led me to many of this week’s happy moments and to the ability to serve more of you who are looking for healing, in even more ways.

I am so honored to be a part of your journey to living your best personal, professional, and philanthropic lives, Journeyer.

Healing is exponential, so when we heal ourselves, we breathe that healing back out onto the world…

Here are a few other highlights of the simple, fleeting events that fed my happy organ.

I listened to the little voice that encouraged me to pursue more energy healing therapies after my life changing experience the first time I received IET®.

I met a woman in my Rieki training class, and when I later listened to that same voice who suggested I reach out to her, we discovered that our paths have been fully intertwined since February, only through mutual acquaintances, but ultimately connections that led us to the same class.

I listened to the internal nudge that suggested I stop and inquire about an office space. My first reaction was that my day was already full and looking at office space was not part of that day’s plan.

But I found a place to turn my car around. I parked and made a phone call from the lobby of the commercial building. And I knew I’d made the right decision when the property manager told me the following:

* He usually isn’t in the office and people have to make appointments, but I just happened to catch him at the right time.

* He only had one of the smallest units left and it had just come available two days prior when the woman who had rented it in March came down with a long-term illness and had to abandon her business for health reasons.

* I listened to the spiritual whispering that led me to ask if he’d consider letting me take over the balance of her lease rather than take on an entire month. After a pause, he said he would do that for me.

Journeyer, I can’t help but recognize all of the little life miracles that happened this past Wednesday.

The woman was no doubt concerned about the balance due on the lease she’d had to break, but now that it was rented, she was no longer responsible, which had to be a huge relief that will now allow her to focus on her health.

I need an office from which to practice Integrated Energy Therapy® and Reiki, but I was a little concerned about an entire year’s lease.

The same day I signed the lease I had someone contact me about doing an IET® session for her mother and it looks like Kelly and one of her friends are also going to do an energy session and a holistic healing reading from my Tarot, Runes, and Healing Crystals.

Life is too big for a bag, Journeyer. It seems to flow best when it is allowed to ebb and flow and surge when the time is right.

Some of the non-work elements of my week include a kayak excursion, this time with our pooch, who seemed to be a natural! 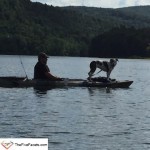 The release of another anthology I contributed to, this one on miscarriage and loss of a pregnancy. 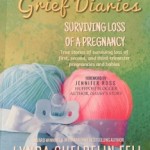 Thomas’ truck on the highway. The back door had an image of an English muffin with a strawberry jam smiley face.

A good night’s sleep after our Friday trip that seemed to weave shit into everything I touched. Seriously, if it could have gone wrong, it did.

But alas, life is too big to be entrenched in nothing but negativity and each minute or hour or day is opportunity for something different. All we have to do is choose it, Journeyer.

Even if it means including a prayer of bedtime gratitude for a piece of bread dabbed with jelly, a personal mobile device hotspot that allowed me to order my energy therapy table and accessories, and an uber comfy bed we arrived to.

New terrain and trips down memory lane as I revisited my parents’ homes and the places we used to visit our grandparents. 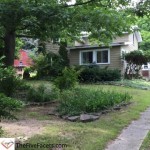 Meeting the current owner of my mother’s birthplace, childhood and young adult home, and getting permission to stop by any time and walk around the property.

New foods and meeting new people, like the family at the table next to us with whom we had a lively and jovial exchange about Mr. Generosity drawing the short card, once again; a fun game to see who was picking up the evening’s tab.

Abundant sunshine, soaks in our hot tub, and the brilliant shimmer of a bright full moon.

A baby bunny who wandered out at dusk. 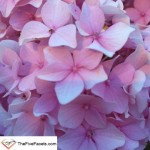 Four dogs to love up to when I’m missing our Patches who stayed home with Big Guy.

Spending time with my far away family and getting to  know them better.

What about you, Journeyer? What moment(s) brought a smile to your heart, filled your life with joy, or brought warmth to your heart? Join me in spreading a little happiness? It’s what the world needs most right now. Share something in a comment below?

2 Comments on “Life is Too Big for a Bag”