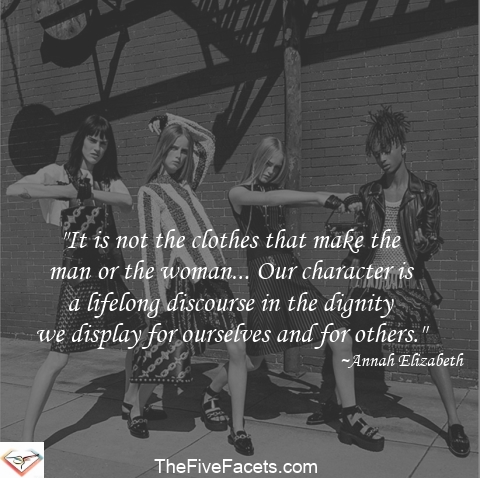 Earlier this week I read Amazing Women Rock’s social media share about Jaden Smith modeling Louis Vuitton Womenswear. Many of the comments were disheartening and some were downright disturbing.

The one that made the most sense to me came from AMR: “Plenty of women have dressed in men’s clothing over the decades…”

The truth is that it has been going on for eighty years! The iconic Katharine Hepburn was one of the first to choose her own style over expectation. Back in the 30s!

I find it hard to believe that we are STILL dealing with gender bias! This Facebook post reminded me of a piece I wrote many years ago…a rebuttal to one man’s view that “The achievements of feminist activism-particularly the infusion of women into the work force-have altered the expectations that the sexes have for each other and themselves.”

I believe that the only expectations we should have for one another is to treat each other with kindness, compassion, and overall courtesy.

This  young lady is wise way beyond her years!!!

My written rebuttal was part of a creative writing course and thanks to the internet and The New York Times magazine archive, I have located the piece I believe to be the one we addressed: Alone Together, The Unromantic Generation.

The professor’s comment? “This is quite a piece—it really makes me think.”

You want to know something truly, truly, and eerily ironic?

The author of that 1987 article and the photographer of this 2016 photo shoot share the same name.

That irony, Journeyer, is not lost on me…not one tiny bit!!

Do you think it will ever end?

May the following words move you in some way, too; may they stimulate conversation and debate and thought…

Reading your comments is a highlight of my day, so please share something when you’re done!

Without further adieu, here’s how I responded to Mr. Weber’s suggestions that the feminist movement was responsible for such things as divorce (and an unromantic society), economic gloom, and sexually transmitted diseases…

Give Me a Break, and Give Me More, of Everything (Inlcuding Romance)

Bruce Weber, if my calculations are correct, is ten years older than I. His age puts him smack dab in the middle between my parent’s generation, and mine. Weber’s essay, written circa 1986, is a fairly accurate perception of college graduate ideals of that particular period. Most of us, men and women, seemed to regard the pursuit of lucrative careers and technology as a number one priority.

Weber’s following statement, however, is from a man’s perspective. Stated politely. “The achievements of feminist activism-particularly the infusion of women into the work force-have altered the expectations that the sexes have for each other and themselves.” This statement comes directly on the heels of data pertaining to the highest recorded divorce rate, the effects of sexually transmitted diseases; and precedes forecasts of economic gloom. I believe these changes in the expectations between the sexes have continually evolved, were spawned by growth, by “man’s” desire for more, of everything—and not, as Weber seems to imply, the sole result of the achievements of women in the work force.

I had a professor in college I would love to be able to quote verbatim here, but unfortunately I have not the time to locate him, or my notes from his class.

During a lecture he listed the spatial advances of time which went something like this: It took man thousands of years to create the stone wheel, thousands more to create the wood wheel, a few hundred years later man created the steel wheel, and less than two-hundred years later we marveled at the rubber tire. He continued his chronological list of advancements with the light bulb, the radio, the television, etc. After a mere fifty years, give or take a few, of the invention of the rubber tire, man landed on the moon.

Twenty-one years ago, in 1982, computers were the “next big thing.” They were huge monstrosities, encompassing entire buildings, and slow as molasses in January. Today, we can instant message a picture, with a love note, through a phone smaller than the pocket of my husband’s shirt.

Prior to the Industrial Revolution people toiled to live. They made by hand, or bartered, just about everything they owned.

Being a farm owner, myself, I recognize the importance of individual talent. If everyone in the family knew how to repair a tractor, but no one knew how to can the crops, families would have starved, and years of hard work would have been for naught.

The universe invented women as baby-making machines—not man, and not woman. If women were the laborers and the bearers of life, families would have starved as well; for if a woman stopped every time the baby was hungry (remember, Isomil didn’t exist), the crops would never have been planted. If one were to take, the barest amount of time, say thirty minutes out of every two hours to feed the baby, that would equate to a twenty-five percent reduction in one’s ability to do nothing more than feed her family. That’s a huge chunk in a twenty-four hour day (also created by the universe) when producing food consumed as much as fifteen hours a day. Thus separation of performance, expectationas Weber puts it, was a matter of necessity, not ego.

In 1789 the first, now barbaric spinning wheel was produced.  In the mid 1850s, the Industrial Revolution as we know it officially began.

Innovation, creativity, and man’s quest for efficiency, for a “better life” has been in existence since the beginning of time. But the Industrial Revolution replaced “tinkering” and created a whole new state of necessity.

People enjoyed the luxuries of working less, both in time and energy. And thus the frenzy began—give me more. The work load was lessened-give me more ways to reduce my work load. Pleasure activities became more prevalent-give me more things to occupy my time. The ingredient needed to make more, was people. Men and women and children alike, were needed to make more, create more, thus taking them out of the home. And somewhere in the mix, was the quest for more knowledge-give me more so I can make more, create more, have a better life. Families were leaving the fields because they could—in search of more.

The feminist movement was about ego as much as about equality. Women, as well as men were being thrust into a whole new existence, out of a self-created necessity. Some wanted to be there, and some did not.  But the give me more machine had been set in motion, it would grow and grow, perpetuating the need for more – more people, etc.

Give me more Struggle. Power. Control. Ego. These things, screenplays of sorts, also created by the universe, churned in a whole new light, out of man and woman.

I won’t elaborate too long on my views of equality – you’d be here for days. I do believe people should be compensated, in like kind, for their ability to perform.  I also believe, in the struggle for “equality,” our society often creates more discrimination in its pursuit of abolishing it – in essence, “going from one extreme to another.” Case in point—a Caucasian associate received a hefty, minority scholarship from a self-proclaimed, black college. Please note here, this is the first reference coming to mind and is not, in any way, a bias against race.

Thus, in the pursuit of a “better-give me more” life, all things were pursued, by men and women alike, including equality and the right to respect.

The baby boomers, my generation’s parents, were the epitome of “give me more.” This generation was the by-product of the great depression and going without, and the beginning of the fastest growing technological advances in the history of our existence.  In the 1960s, as NASA prepared to send “man” to the moon, our parents were star-struck young twenty-year olds. That generation became the piranha of more, spawning and spitting out the frenzy—mine, and half of Weber’s generation.

In the thirst for more, everyone became jockeys, trying to find balance on an unsteady seat, vying for position, racing against the clock and each other. In a sense, men and women were thrust into a whole new universe–a whole new way of living, thinking, breathing, eating and wanting—of each other, and more.

Therefore, I conclude it was the achievements of technological advancements that churned, turned out, and spat out, the individuality of feminist movements, and the “unromantic generation.”  Not the other way around. Expectations of the sexes were altered the day women were created into baby-making machines, the day the universe created “man.” Each new wave of achievements became handicaps in the race of adaptability.

My spouse, a man, disagrees.  That is but one of the quandaries of the universe.