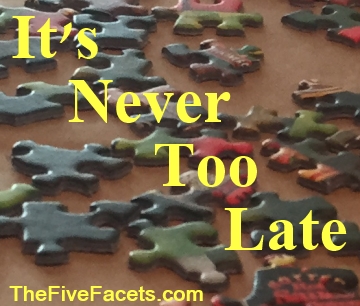 “You know you’re a little late,” she said.

I was having lunch with a woman I’ve dealt with many times during the nine year span our children have been coming through our local high school.

When I sent her an e-mail thanking her for all her help over the years, she suggested we actually meet over lunch.

I learned about her two grown sons who haven’t talked to one another in more than a decade, for reasons unknown to her; she told me about the newest grandchild she was excited to meet in the coming weeks, about her storied career in education, and about how lonely she is since most of her and her husband’s friends have moved south.

I told her about my three children’s successes and shared with her my work with The Five Facets on Healing, and enjoyed listening to her thoughts about everything from logo ideas to marketing strategies.

“You know you’re running out of time,” she added when I asked her what she meant about being late.

I’d be lying if I told you I haven’t thought that I’d love to have started this work earlier in life, Journeyer, but each time that chatter has started in my head I’ve shushed it.

You see, I believe this work is going to live far beyond my mortal years, that it’s going to serve people for generations to come, so all I have to worry about is planting the seeds, nurturing them with my energy and love, getting the word out, and watching it grow.

This groundwork is sowing different seeds of happiness.

The foundation is about building relationships with ourselves and with others; it’s about understanding we are part of one giant neighborhood where, right next door, we have neighbors in grief and allies in healing.

And it’s about recognizing those moments that bring us peace, comfort, or joy.

In spite of the grueling work it’s taken to flesh out this program, I have found great happiness in knowing I am making a difference.

Making a difference, a positive difference…heck, any sort of difference that stimulates growth, fills me up.

One of the other truths that brings me great comfort is the knowledge that it is never really too late.

Yes, it might be too late to do something the way we had expected to do it or envisioned doing it, but if we’re willing to be creative or flexible, it’s really never too late to do anything.

I’ve begun many a thank you note with some variation of this message, “Though the timing of this greeting might be a little tardy, I believe it’s never too late to let someone know you appreciate her.”

It’s never too late to say “Thank you.”

Even if the person is deceased, your appreciation is making its way out into the universe, that positive energy is being expended.

In the same regard it’s never to late to say “I love you.”

Want to end a family feud? Just send a note or leave a voicemail that says so.

You cannot control how the other person will receive or react to the message, but at least you can make it happen for yourself.

It’s never too late to marvel at the beauty around you.

Warren first spotted this doe and her two fawn while we were running one of our many errands this past week. It’s never to late to pursue a passion.

It might be difficult to achieve an Olympic dream at thirty-three, but that didn’t stop Dara Torres, nor did the challenge stop sixty-four-year-old Diana Nyad from making a historic swim from Cuba to Florida.

There may be obstacles, but, again, if you’re creative and flexible, you can accomplish some altered version of your dream.

More than a year ago I posted a wish list of projects I wanted done around the house.

Warren and I are finally tackling some of those things!

It’s never too late to move a hot tub!

With a little of Warren’s ingenuity, four of us not only moved it, we moved it down onto a newly built platform several feet below its original location! My mom came in from California last week and while we were working on the hot tub she was taking care of all sorts of other tasks inside the house.

One of the things I always told my children is that as a family we “work hard together and we play hard together.”

Last fall I purchased a thousand piece puzzle for Warren for his birthday. The image was a shelf full of hot sauce bottles. Warren loves his hot sauce and Big Guy and I love working puzzles. It was a winter project that never came to fruition.

Knowing that Mom loves a good challenge, too, I set up the tables at which we all made frequent stops to solve a piece or two.

It’s never too late to solve a puzzle, be it a grief puzzle or a jigsaw!

If you’re a puzzle lover, too, you can relate to how exhilarating it is when you actually connect pieces in a hard degree of difficulty project! Speaking of excitement, Big Guy, who is Valedictorian of his class, was recognized at a ceremony with the other Vals and Sals from our region.

It’s never too late to learn something new.

The man who gave the closing speech listed ten valuable suggestions and points of observation, one of which is “Never place a clothesline near a bird feeder.”

The point of that message is that we need to remember to stop and think about the bigger picture before we act.

But one of the most important messages was that no matter where the students went after graduation, be it the workforce or college, their decisions had value.

One of the things I always told my children as they were growing up is that “You can learn something new every day if your mind is open to it and it might be something as simple as a person’s name.” My heart is bursting with pride to know that all three of my children continue to stretch their minds and pursue the many things that bring them joy and fulfillment.

My Happy Happens™ column has been running on Sundays or Mondays for four years now, and I have been stressing out every day that I haven’t written this past week’s post.

But each time those thoughts came to mind I reminded myself that though I do hope my writing and my work with The Five Facets will will some day start helping pay the bills, I don’t do this work because of the money; I do it because I love it…

It makes me happy.

What about you, Journeyer? What’s not too late for you to do?

4 Comments on “It’s Never Too Late”