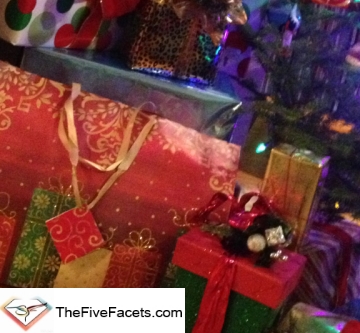 One quote from this Christmas season seems to have neatly wrapped itself inside my brain.

“That’s a thoughtful gift,” someone exhaled when she opened my gift to her.

A handcrafted, glass color palette seemed like the perfect gift for an artist.

I’m a bit like Santa; I spend an entire year preparing for gift giving.

“Oh, this reminds me of so-and-so,” is a common exclamation on nearly every shopping trip I take.

I have several boxes I keep stashed for just such items, and now that two of my children are living on their own, storing them is a much easier task now that I don’t have to hide the cartons!

My children’s wish lists were always small and I loved coming up with that special surprise that would light up their faces.

That’s how I, someone who had a heart-palpitating fear of snakes, ended up with a ball python pet in my home.

My second boy began collecting snakes from the fields from the time he was old enough to walk. “Look, Mommy!” he’d squeal as he dangled the vile species in front of my face. “Can I keep it?!”

Before he was old enough to fully understand my fear, I’d reply with statements like, “No, we need to put him back where you found him so he’ll be able to find his Mommy, Daddy, and his brothers and sisters.”

But later, having been told I would never allow him to own a snake, Fave couldn’t have been any more delighted that Christmas year I gave Santa permission to leave a reptile under the tree.

I’ll never forget that September when the question popped into my head. I was sitting at my desk, penning my list.

I always asked my children for their wish lists far in advance of whatever celebration was coming.

I clearly remember asking  myself the question, “What would make him totally happy?”

I clearly remember hearing the response, a snake.

I clearly remember my reply, Oh, hell no.

But the thought didn’t leave me and two weeks later I remember thinking, It’s just one of God’s creatures. You can do this.

I know. We’ll get him one of those itty bitty snakes that eats pellets.

Warren and the store owner both resisted the temptation to bust out laughing when I announced what I was looking for, seeing as how all snakes are carnivorous.

I managed not to break out in a sweat, pee myself, or faint when the man walked us past the giant aquarium that housed an enormous snake sunning himself under the lamps in a plastic swimming pool.

In the end we settled on a one-year-old ball python who ended up living with us for eleven years, two years after Fave left for college.

You can see by the look on these faces that this slithering thing was the perfect gift for one little boy (and for the little brother who was equally enthused.) Fave immediately announced he was going to name her Fluffy. The reference to J.K. Rowling’s three-headed dog went unnoticed on me, but not Warren, who thought the name was as fitting as the gift itself. Fave sharing his Christmas gift with his little brother

A year after I donated her to a local nature center, I was there with a group of students. I was excited to see our girl and quite disappointed when I didn’t find her in any of the displays.

“We can tell she was part of your family,” the woman said when I inquired about Fluffy. “She is so social. We use her for all of our demonstrations and our birthday parties. She has a special place in our office, where we can constantly interact with her.”

That there, is one type of perfect gift for me.

Though I have done that, I can honestly say it that giving those gifts have brought me little pleasure.

A gift is NOT something that is given out of demand or obligation.

You can always tell when a person is giving because they feel they have to, for the item has nothing to do with you. It’s the purple sweater you receive when you don’t even like the color purple and you’ve never worn a sweater a day in your life.

I once received an oil lantern in a battered box that was covered in layers of dust. True story. It will come as no surprise to you that this “gift” came from a family member who has issues with me but is in a position to feel obligated to stuff something into a bag.

The best gifts are thoughtful gifts, items that excite the receiver, make her laugh, take her breath away, or make her cry happy tears.

A gift is something personal, given willingly to another.

We need to boycott commercialism and “have to.”

We need to remember the meaning behind giving.

We need to remember that the perfect gift isn’t about money or material things.

The perfect gift is a thoughtful gift, something that represents what is at the heart of the receiver.

Happy New Year, Journeyer. May your coming year be filled with thoughtful gifts in all shapes, sizes, and acts of kindness.

2 Comments on “The Perfect Gift”