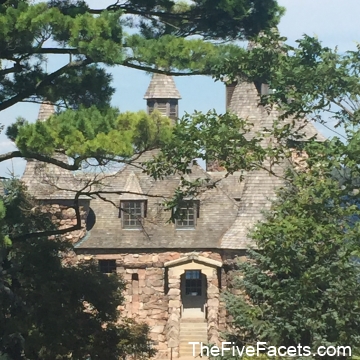 Well, Journeyer, last week’s Happy Happens edition is a bit late, but I promise I have a VERY GOOD EXCUSE.

EXCUSES THAT ARE SO MUCH BETTER, SO MUCH MORE ORIGINAL AND CAPTIVATING THAN:

My computer crashed (which it has numerous times in the last week and a half) or the one we adults say all too often: “Life got in the way.”

Life DID get in the way, Journeyer, the good kind of life.

We bolted, Journeyer. Finally spent some much needed time having fun and letting loose.

Yep. Warren and I actually escaped from that regimented life of work and work and more work.

Warren and Big Guy and I took the boat out for a few hours on Wednesday and soaked up the glorious sunshine. We went to one of the local fairs where we enjoyed excellent fair fare like Italian sausage with peppers and onions, a salted soft pretzel, and one of the most amazing peanut butter stuffed eclairs you can sink your teeth into!

I looked everywhere for the This isn’t the life I ordered guy that I met a few years ago when I went. I was hoping to find him manning the grill with a different t-shirt to spark a discussion, but, alas, I didn’t find him…

Big Guy and one of his female friends were there, and since he, like my hubby, doesn’t like wild and crazy rides, the four of us hooked up for a little while so the gals could enjoy a few thrills…though we did get the guys on this ride! I drove Beauty to Buffalo on Saturday for an exam she had signed up to take, and while she was sitting through a grueling four-hour test, I was breathing in the fresh Niagara Falls air. But the best part of all was meeting up with an aunt and uncle who were traveling by motorcycle from Michigan to Bar Harbor, Maine. Visiting a park in upstate NY

En route, they and the two other couples they were traveling with were making a stopover in the Thousand Islands to see the Boldt Castle.

Warren and I visited that area and the castle during our quick, three-day honeymoon. Some of the one-hundred-twenty-nine rooms had been restored after thirty-some years of the building sitting vacant, but many more years of hard work and good money spent would be in order before visitors could see beyond the first floor.

Though we’ve vowed to return many times in the past twenty-six years, we never have.

Since the riders were planning only to pass through Alexandria Bay, Hubby and I labored over making a seven-hour drive for a mere few hours visit.

And then, at the last minute, we decided to toss aside logic and stress by tossing a few clothes and toiletries into a bag and joining the group. After visiting Boldt Castle, we all went to this fabulous restaurant called Riley’s. Great food and service! The plan was for us to part ways there. The tuckered out bikers had been told they’d have to ride an hour out to find a hotel in this tourist town’s peak season. Not wanting to leave it to chance, we sat on the parking lot hillside searching the internet from my trusty little hot spot.

We thought we’d struck the bargain of the century until I realized I’d just reserved rooms in Canada! While I canceled that reservation and began my search anew, one of the fellas decided to check out the little motel not a hundred yards from us.

Would you believe they had vacancies? Four of them! The staff was helpful and pleasant, the rooms clean, bed comfortable, and the view spectacular.

The amenities are a little dated, but the newest owners are working hard to upgrade the facilities and couldn’t have been nicer.

I met owner Judy the morning we checked out of our room and two of her staff members were kind enough to pose for this pic! Sweet as pie they were! Following check-out, Warren and I meandered through the town shops and the local art co-op, where Tom confirmed a rumor someone had told my uncle when he told them he was visiting the castle. If the local folklore is true, the history behind this legend is a less-romantic, non-Hollywood-ized version of the truth. Don’t know how I feel about that, Folks, not after repeating the fairy-tale turned tragic story for more than twenty-five years. Then, again, if it is the truth, then the truth should be told and is equally interesting and certainly sparks my curiosity.

Story or not, one thing is for sure: Boldt-ing with Warren and family topped last week’s happy!

What about you, Journeyer? What moment(s) freed your spirit and your smile last week? Share something here and spread a little joy!

Oh! I forgot to mention that Uncle also took me for a quick ride on his Harley! I could get used to that.