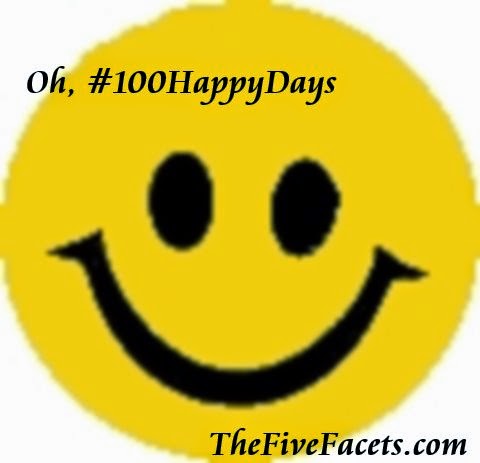 Oh, Happy Days.
#100HappyDays!
JOURNEYERS! Did you see the Today show this morning?
I must admit I did not. It is a rare occasion I watch television or film, but I can happily report that I obtain the vast majority of my worldly news via The Huffington Post or through you, my friends, through your blogs and your social media pages and through our wonderful in-person and cyber conversations.
That is how I learned about the #100HappyDays craze.
I must admit that at first, I was a little, teensy-weensy, jealous.
Okay, maybe more like Pluto-sized envious.
#HappyHappens is the VERY thing we’ve been doing for four-and-a-half years, that’s like a #GazillionHappyDays!
Okay, that might be a slight exaggeration.
It’s only been #1004HappyDays since that very first post Webs of Joy.
That’s #143Weeks+3HappyDays!
And as much as I love math, I’m no Rainman. These numbers are coming to you from the brilliant minds behind this great webpage I found via Google, acompany that definitely knows how to keep #HappyHappening in the work place!
As I read that Today piece about Dmitry Golubnichy, the mastermind behind #100HappyDays, I began to feel that green-eyed sensation wash over me like a tidal wave.
Some people have all the luck.
And then I remembered my newfound friend, Angela Schmoll, who I first connected with via my work on grief and healing.
A stray comment on another site led her to my #HappyHappens column, which led her to a deeper reflection, which led her to this beautiful journey into joy.
An in-person meeting will one day headline this series, Journeyers…I just know it…
At a time when I felt like the work I love so much wasn’t making a difference, Angela reminded me that we can change the world by effecting the life of but one person.
It’s that Bill Winston quote: “To the world you might be one person, but to one person you might be the world.”

One simple moment bringing two people together, forever enriching both lives.
Somehow Dmitry Golubnichy has created a social media movement that has landed him on the Today show and one that could land him a book deal.
The coveted contract with a powerhouse publisher like Simon & Schuster or Random House.
BA-BAM!
New York Times Bestseller!!
Just. Like. That.
Even as I felt the pointed horns begin to protrude from my skull and my blood turn green, I remembered several things.
Firstly, though I dream of one day waking up to some forty-thousand followers, I am not only grateful for the forty-some people that join me each week, I do not write for that reason.
Stories and words are my silver spoon; they are what keep me healthy and whole, richer than any class or blue ribbon chocolate peanut butter pie.
As I was trying to find the person who wrote something like “Write because you love to write, not because of the money,” I stumbled across this poignant post.
It was as if these words, “We begin to focus on the audience more than the act of creating, and ultimately, our art suffers,” whispered into my ear Breathe, Annah, just focus on breathing your life out and onto the page the way you were born to.
Jeff’s words not only highlighted something I’ve known for quite some time, they reminded me of why I write.
I write because I don’t know how not to write.
I write because it makes a difference in my life.
I need to say that again…
I write because it makes a difference in my life.
Every person whose life I somehow touch is the whipped cream atop my favorite slice of dessert.
Along the way, I have let the numbers influence my decisions, have allowed the comparison of others’ stats create disappointment and deter me.
And I have to admit I’ve been pretty anxious about how my lack of platform might tarnish my chances at winning the Hay House book proposal contest.
So, I spend what free time I do have reading countless other fabulous blogs, and trying to navigate a few shares and comments on Twitter and Pinterest and Facebook and on those other wonderful writer’s even more wonderful-er sites.
Okay, okay, I occasinally lose track of time playing Candy Crush, too…
I’ve known for months that I spend more time trying to connect with others than I spend connecting with myself.
Dmitry Golubnichy didn’t set out to change anyone’s life other than his own.
He set out to build #100HappyDays.
He created it. He published it.
And people came.
There are millions who will hop on this bandwagon just because of the firestorm that has taken over social media and the Today show.
They will be but a flash in the pan, people whose sparks will burn out faster than the shooting stars that fill my happy as they flit across my nighttime sky.
They will remember neither feeling nor fame and will move on to the next Mr. or Mrs. Fifteen Minutes.
But then there will be others like Angela—hopefully millions of Angelas—people who will relate to Dmitry’s endeavors on a deeply personal level.
The spiritual calling will become their own and they will pay it forward simply by breathing their own happiness out into the world around them.
Thank you Dmitry, for your #100HappyDays that have lived on and for bringing me back to another of my own…
Moment by moment, Journeyer, #HappyHappens…
Until next we meet again, yours in healing, hope, and happiness…
~AE
Soon…