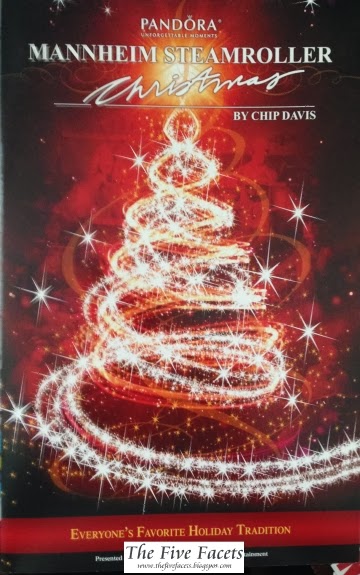 Friends, I started the week off with the most magnificent sounds of the season you can imagine! And here’s me with three members of Mannheim Steamroller’s Red Touring Group! Three Members of the Red Touring Group
L-R: Jeff Yang, Tom Sharpe, Joey Gulizia
I’ve listened to them for YEARS, and here they showed up in my backyard!
Okay, not literally of course, but practically in my back yard! AND they indulged me with this photo…
(though the poor violinist on the left might not be so charitable the next time…looks like I nearly sliced his neck with my program!)
If you’ve never heard their Christmas you must run, RUN I tell you, to the nearest store and pick up any one of their Christmas CD’s.
I promise you will LOVE EVERY NANO SECOND OF THE SHOW.
And if you ever have the chance to see one of the touring groups in person, ditch the dress heels, strap on your running shoes and get to the ticket counter as fast as you can.
This music is even more spectacular in person, and these band members?
Every single one of them plays multiple instruments, as in like four or five or more!
No kidding.
And the one drummer, Tom Sharpe, it’s as if those drum sticks are a fluid extension of his body. I’ve never seen anything like it folks; his body Feels. Every. Single. Note.
Honestly. It’s like he IS the music itself.
Want to know what I decided as I sat in that audience?
If I had a bucket list, attending a Mannheim Steamroller concert would be at the top of it.
When I told the band director that during the meet and greet after the show, he smiled and told me, “Just be sure to make it a long list.”
I’ve never been the groupie type, but there’s a first for everything isn’t there…
And, then there’s the figurative music to my ears…
Things like, “My children will be home for Christmas” and “My children will be home for Christmas.”
That’s worth a chorus line, don’t you think?!
The week wouldn’t be complete without the next installment in the Soon-to-be-50 cards my mother has been sending.
﻿ Fifty is like the most glorious harmony to me because I’ve survived, Journeyers.
I’ve lived through puberty and bulimia and depression and child loss and miscarriage and motherhood and infidelity (times two) and a fire that claimed our family business and it’s been seven years since I kicked a twenty-six year nicotine addiction.
I’ve cried and laughed and given up and stood up and I am here, turning fifty and finally, finally knowing what I want to be now that I’m all grown up.
Which means that the best years are ahead of me!
And get this—people are actually going to pay me to be older.

I don’t know about you, but I think that’s one mighty fine birthday gift, one that just keeps on giving, day in and day out.
This group is going to give me discounts and put more money in my pocket for things like trips to NYC and Europeand Nacogdoches, TX, and for those delicious smelling perfumes I love.
Who knows, maybe those savings will begin today while I’m out enjoying a little holiday shopping!
And I do mean enjoy, Journeyers. If you’re out and about, I hope you, too, will not think of gift giving as a chore, but something you are doing from the heart…
If you are stressed about it, then don’t do it…schedule a time for after the holidays to gather with friends and extended family…
It won’t be the end of the world. I promise.
Christmas, after all, isn’t about commercialism; it’s about the music of that moment we call birth…life…
May you feel your own heart songs in the coming week, Journeyers…

What about you? What musical or other Moments(s) fed your happy this week?
Soon…
﻿
﻿