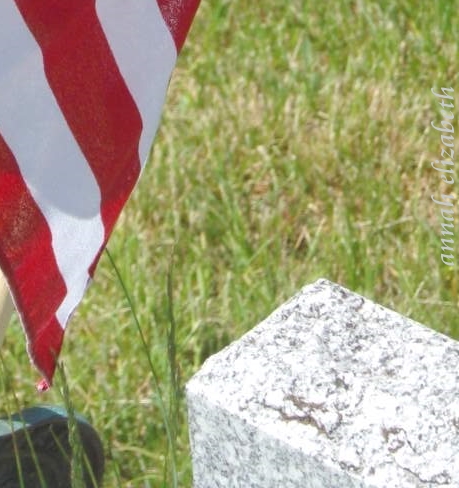 On Sunday I attended a simple ceremony for a sixty-something-year-old man who had given up on life years before his body did.
He wasn’t a veteran, but one of the young men in attendance has been newly inducted into the Marines and may soon be deployed.
As I stared at the countless flags dotting the landscape on all sides of us, I couldn’t help but think about how many men and women of this tiny town had served our country.

﻿
I wondered how many had died while defending us and our nation and I thought about the repercussions of so much loss in such a small space. Yesterday, we did like so many families do with their holiday, we acknowledged our heroes and celebrated with food and fun.
The sunny and balmy day afforded us opportunity to take the boat to the lake for the day, where Warren and the kids fished from sunup until their bait ran out.
Four o’clock in the morning is an ungodly hour of the day and one that literally makes me sick to my stomach, not to mention just a tad bit cranky.
So I stayed home to sleep in and to pack up the day’s food rations before joining them.
We filled our bellies with burgers and brownies and then returned to their favorite fishing hole.
As we’d cruised up the lake, Warren had pointed to the Sheriff’s boat and mentioned the flurry of activity they’d seen.
I spotted the white tents as I watched Big Guy and Beauty, so relaxed sitting on the edge of the boat, watching for signs of fish in their floating bobbers.

﻿
And it hit me as we chatted with our friends who own the pier where we docked the boat.
I had heard something about the capsized canoe, but hadn’t given much extended thought to the university student or this community an hour-and-a-half from my home.
But then, they we were, front and center, enjoying ourselves at the staging center’s side.
The parents of the boy had been there every day, I was told, waiting until dive teams and emergency personal called off the end of each search.
My heart ached for this family who had no answers, who stood in waiting every second of every minute of every day.
Without positive proof—a body—were they holding hope in their hearts that some bizarre or miraculous event, some twist of fate had their child alive but unable to return home?
I had to go. To offer Hope. Courage. Solace. To do something.
As I walked down to the rescue and recovery site, I rehearsed what I’d say.
Hi, I’m Annah. I just want to tell you I’m so sorry you’re having to experience this. My son died twenty-three years ago and I just want you to know that you can make it through this awful time, I imagined myself saying.
And then I fretted as to whether or not my words, my lame attempt at comforting them would cause them more grief, would I be saying the right thing or the wrong thing for them.
They might not even believe he’s gone…
But they weren’t there, the rescue diver told me, “This is the first day we haven’t seen them.”
A news report announced a Memorial service for the family to be held later in the day, at one of the park’s points.
Maybe it was too much for them to take in in one day, I thought, maybe they were storing their energy reserves to greet the masses that surely would come out to remember this young man gone too soon.
As I thought about these parents, my mind wandered to the mothers and fathers of all those serving our great nation today, to those whose children are MIA…
The constant waiting and wondering and wishing and worshipping, for safe returns and recoveries, healing of any kind.
Glennon Melton was chastised by one of her readers for focusing too much on the present and forgetting that Memorial Day is about the fallen.
The holiday is dedicated to all those who have served our country, to help us remember how we came by our freedoms, and to pay homage to those men and woman and for our liberties.
I do believe that, Journeyers, but I also believe that we should honor in our hearts the family and friends and communities who shared those loved ones with us.
﻿ For they are as courageous and brave as those who followed the call to duty.

I sent them, all of them, prayers filled with peace and passion.
I offered up silent hugs and hope for healing to the people I’d seen at the cemetery, the woman on her hands and knees, planting love in the freshly tilled plot. I sent the same to the elderly couple who had placed a bouquet against another stone and to the family of the young Marine in our midst.
As I sat on our watercraft yesterday, with the sun kissing the earth and all that is upon it, I held space for all those left behind.
Holding space, as I understand it, is to experience an event with another person without responding to her emotions or gestures or words. It’s about observing without judgment.
Holding space“is a gift of consciousness that recognizes something really beautiful is trying to emerge through another human being.”
I first came across this expression on a comment that Glennon made on another blog I follow.
Glennon, if you aren’t familiar with her, calls herself a truth-teller and a hope-spreader. She writes with a grace that breathes those two things onto the page, along with compassion and love and, yes, holding space for each one of us.
Her work is so powerful it soared to New York Best Seller lists even before the ink for her first book, Carry On, Warriors, was dry.
Each one of us is a warrior, fighting for ourselves, our friends, our families, and even for people we’ve never met.
At times we will kick and scream at the top of our lungs, as we battle against Injustice.
And at times, we will simply sit and hold space.
Sometimes it’s all we can do.
Sometimes, it’s all we need.
Thank you for your courage, Journeyers, for your compassion, your kindnesses, and mostly for caring and sharing…
It’s how those of us who are left behind get through each day, how we grow, how we continue to love and feel and endure and hope…
It’s how we survive…
Soon…