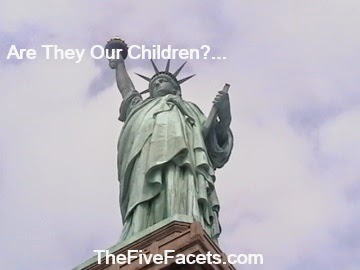 And it continues to divide our country.

I tend to refrain from weighing in on such political hot topics, but I think too many of us are overlooking some important facts.
I, like those fighting for unrestrained immigration, empathize with the plight of those who arrive on our shores tired, alone, afraid, and impoverished.
My heart’s compassion dreams of a world where everyone is loved and clothed and nurtured and folded into the arms of those who want them to flourish.
And I differentiate not between stranger and friend when reaching out with a helping hand.
Last week I read a blog post by the beloved, bestselling author, Glennon Doyle Melton.
I have a great respect and regard for her work in inspiring others and helping make a difference in the lives of so many, and yet, I could not deny some other great realities as I read her musings on this very topic.
Glennon prefaces her piece by saying that she does “not know what the future of immigration should look like,” and encourages us to remain mindful of a few things.
In her lyrical voice, this influential woman quotes these words associated with the Statue of Liberty, “Give me your tired, your poor, your huddled masses yearning to breathe free.”
Let us remember that those words were not decreed by our forefathers who declared our independence, or by those who invited people into “the new land” via Ellis Island.
They were words written by poet Emma Lazarus, commissioned as part of a fundraiser to secure the financial resources needed for the pedestal upon which this monument sits.
Following Lazarus’ death, and decades after the statue was put in place, a friend of the author discovered the document and, as a way to memorialize the poet’s significant contribution to the event, pushed to have the engraved plaque installed on those inner walls of history.
In her beautifully written prose, Glennon reminds us that Jesus, himself, was an immigrant. She quotes a line from scripture and reminds us that, as Christians, the Bible mentions often the need to care for those around us.
Let us recall the many, many charitable organizations, like the CWS she mentions, and government aid dedicated to helping citizens from other countries.
And though there is always more that can be done, we Americans spend billions of our own monetary, emotional, and time currency in improving the lives of those outside our borders.
In doing this, we are the helpers she references in this Fred Rogers quote: “Look for the helpers. You will always find people who are helping.”

College students and doctors and teachers and ordinary citizens are spending their own hard-earned dollars to help others, to teach them how to better provide for one another; they are crossing racial and gender and spiritual borders, all in the name of compassion and caring.

Let us remember that the best way to help another often comes in the form of helping them help themselves. Many years ago I read an article about The Dream Act, a piece of legislation that would allow illegal immigrants who meet certain criteria and followed specific procedures to be allowed to stay in these United States and eventually receive citizenship.
The law takes into account those children, the innocents who were born in our land, to parents who had entered this country without permission or authorization.
The law took into account illegal adults and sought to address as many of them as possible.

And yet, it has yet to be passed and implemented.
Let us remember that even when we first opened the waterways into freedom’s door, we did so with boundaries and guidelines. View of Ellis Island from the Hudson
Travelers were required to pass through medical and legal and mental health screenings.
And though most were allowed to stay, many were turned away.
If one carried with them certain health risks or had broken laws in their native lands, they were denied entry.
Let us remember that the term illegal immigrant bears one simple, unabashed truth: Laws were blatantly ignored.
Regardless of the reason, laws were broken.
When we choose to break rules set forth, we are in essence choosing to accept the consequences assigned to the infraction.
If we are caught breaking the speed limit, we pay a fine.
If we are caught drinking and driving, we lose our license.
If we are caught committing fraud or perjury, we go to jail.
When parents fail to feed and clothe their children, they run risk of losing custody.
One of my Mama Mantras, something my children probably grew tired of hearing me say, was this, “You always have a choice. And Choice comes with consequence. Sometimes that result is in the form of reward and sometimes it’s in the form of penalty.”
When parents enter a country illegally, they are making choices that put themselves and their children at risk of deportation.
One of Fave’s fellow athletes tells the story of competing in a foreign land where she was instructed not to look any male in the eye, for such an action was not tolerated and could result in punitive and harsh consequences.
Let us remember that America is not alone in establishing codes, commandments they expect everyone to follow.
There is a series of tweets going around with the hashtags #TheyAreOurChildren and #TheyAreChildren, where people are tossing out the Golden Rule “Do unto others,” they are arguing that we should grant children who have fled their homelands permission to stay.
These people argue that it is our obligation to care and provide for these individuals at any and all cost.
Let us remember that failure is imminent for any group that operates without boundary or rules or regulations.
We cannot govern without fair, firm, and consistent directive.
Without form, any structure will collapse.
Witnessing the plight of so many is heartbreaking, indeed, but we cannot let it cloud our judgment, we cannot allow it to destroy the fundamentals that allowed this nation to grow and become a global leader.
Let us remember that our achievement was born on the backs and bloodshed of all those who chose something different for America, men and women who came together to stand up for what they believed in.
Countries are born and evolve out of choice, sacrifice, and love.
Let us remember that love without boundaries is not love at all, but rather an enabling that leads to confusion, opens the door to corruption, and creates resentment.
Let us remember all the helpers who are rolling up their sleeves and working hard to share their knowledge and time and inspiration with those less fortunate, helping them to grow their own nations into more sustainable communities…
Let us remember that tough love is often hardest on those with the biggest of hearts…
Yours in healing, hope, and happiness,
~AE
Soon…