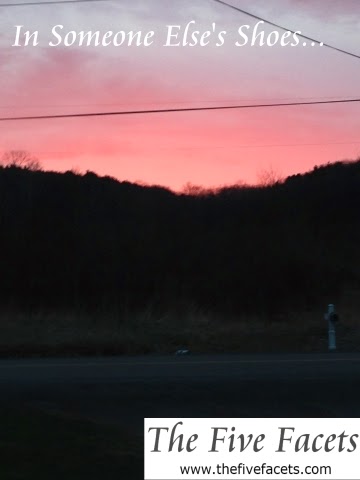 This week’s highlight isn’t something I could photograph.
It’s not tangible or concrete.
One of the things that brought me a great deal of happy this week was an epiphany, an awakening of sorts.
How many times have you heard, or even said to another person, “Put yourself in someone else’s shoes?”
And how many times have you really been able to do that?
I like to think that I’m pretty open-minded.
I’ve often been referred to as intuitive.
I thought I had a pretty good handle on being able to consider what another person might be facing.
But I can honestly say I’ve never really understood the concept until a few days ago.
You see, I’ve spent about fifteen years pleading with Warren to take some sort of role in helping me with the accounting functions that I can’t seem to stay on top of.
I’ve begged and cried and yelled and fretted and thrown my hands up in the air in disgust and hung my head in defeat.
Over. And. Over.
During one of our fall counseling sessions with Trish, Warren agreed to working on creating a new routine, one that included him taking some form of active role.
A number of years ago I dedicated Thursdays as Paperwork and Bill-Paying Day, and Hubby agreed this day would work for him.
He was attentive for a few weeks, being sure to plan the start to his day around noon.
And then…well, he forgot it was Thursday, and I came home from my morning day-job shift to do the bookkeeping tasks solo.
My resentment bubbled.
“After all these years of fighting and conflict, you’d think you’d appreciate how well things were going.” I screamed at him.
“I feel like I’m being dismissed. Again. My needs aren’t being validated,” I lamented.
He apologized and we began anew.
This relapse happened a few times, and, well, you can imagine how those days went.
Last Wednesday, Warren made some reference to something we needed to do when we were doing bills the following morning.
Guess what?
I had made an appointment with my masseuse for nine o’clock.
She’s in the office only a few days a week and it was fairly common for me to take a Thursday morning appointment, opting to push back some other stuff to make up the time I needed in the office.
It hadn’t been a problem before, because I was the only person whose schedule I had to worry about.
As I explained to Warren that I not only had a conflicting appointment, but that I also had to return to work for an extra shift I’d forgotten to tell him about, I recalled another time in the past few months when I’d double-booked my time and not factored him into my plans.
“After all these years, he should understand how these things happen,” I told myself.
While I was driving home (I seem to do some of my best thinking while I’m driving) I had this little earth shattering epiphany.
Warren is probably thinking: After all these years of begging and pleading and fighting to get me involved, you’d think being there would be her first priority.
Suddenly, I found myself standing squarely in Warren’s shoes.
Mindfulness, Journeyer…sometimes we have be even more deliberate in our thoughts and actions…
A wave of appreciation and understanding and of…letting go…washed over me…
A release of some old tensions that definitely made me feel good!
Ittakes two to make a marriage work and only one to screw it up…
How easy it is to forget that we so easily fall into either of those categories…
In other happy news…
I walked out my door to the most glorious, fuchsia-colored sunrise the other morning. This photo doesn’t do justice to the hues that took my breath away.
I was able to attend one of Big Guy’s track meets, where he broke his shot-put record and he and his partner won first place in this multi-team relay tournament.
And I couldn’t help but smile at the thought of all the young shoppers who will no doubt feel a great sense of accomplishment at playing “grown-up,” all the while learning some very valuable life skills. I returned home from some overtime on Saturday to these DEFINITE and UNDENIABLE signs of spring! Doesn’t it just make your heart blossom with happy?!
My work had taken me out of town and the group I was with wanted to stop at an A & W on the way home. Who can resist their cheese curds? Looking at the menu, I couldn’t help but think of Beauty and Big Guy who insist we must stop for these cheesy sticks every time we make a trip to Syracuse.

I could just hear their excitement and laughter as I took this photo to send to my daughter, a simple way of letting her know I’m thinking of her.
And then, Sunday morning, Warren and I stopped at a local diner for breakfast, before heading to tackle a project.
This place was packed, so we chose two of the open bar stools and enjoyed the kind of down-home, good-old-fashioned breakfast that you can only find in a local joint that’s been around for as long as anyone can remember…
Wish I’d thought to take a photo of those seats and that bar, but you, no doubt, know exactly the kind of establishment I’m talking about.
It’s Monday, Journeyer, and this Saturday I’m presenting The Five Facets Philosophy on Healing for the first time in a public setting.
I’m so excited! If you or anyone you know is in the Syracuse area, please consider joining us as I share this plan to help us transition from grief to healing and go on to live our best lives, even in the face of adversity.
Oh! And one more very important thing that warmed my heart last week! It’s actually one of the greatest fulfilling moments of the week.
One of our fellow Journeyers, Angela, from The Reluctant Grandmother, found this #HappyHappens column back in February and decided to adopt the practice of honoring those simple joyful moments at the end of each week.
It’s been a tough few months for her. You see, her son died four months ago.
In an effort to maintain some semblance of life, she decided to embrace the happy along with the sad.
One of the things I’ve wanted since I was a little girl is to make a difference in someone’s life. I know that on some level I have done that many times over, but to actually have someone reach out and tell you that you’ve made a positive impact is…well, all I can think of is that it’s like love…
I might not be able to walk in her shoes during this grief journey, but I do believe we can walk side by side, hand-in-hand, even hundreds of miles apart…
What about you, Journeyer? Where did your Moment(s) of joy come from this past week? Have you found solace or resolution by walking in someone else’s shoes?
All my best and wishes that you, too, will recognize one or two of the joyful flashes that enter your life in the coming week.
Soon…

2 Comments on “In Someone Else’s Shoes”