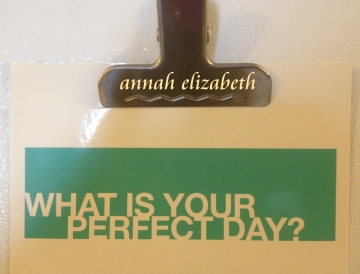 I’ve never really paid much attention to the cards hanging on my therapists’ waiting room fridge.
Until today.
Today these simple words drew me in.
“What is your perfect day?” somehow filled me up, expanded my rib cage and my lungs and my heart and my head with promise and contentment and a sense of pleasure.
But right now, after yet another fight with Hubby, this is the first answer to that question.
The perfect day would be one where Warren and I connect.
On an emotion level.
On any fucking level.
Right now I find myself filling my large green wastebasket with snotty tissues.
Again.
We spent almost our entire ninety-minute Tuesday session figuring out a way of coming together to tackle the burgeoning business demands.
I’ve been pleading for years, “We need to do something differently. I need help.”
The few changes we’ve made have been inconsistent and feeble, and since I made a commitment to expand my writing and my work on loss and healing, those sporadic efforts have proven totally insufficient.
I am six months behind on our accounting entries and reconciliations.
And when we’ve argued, Warren’s smug (that’s how I interpret it) remark is, “Fine, I’ll just take over the accounting. Tell me what I need to do. ”
But (yes, I know, I’ve got to work on eliminating that word from my vocabulary) here’s the thing: Warren has never paid a single bill in his life.
Not one.
No. Wait. I take that back, because he has learned to use Paypal after he’s been playing on Ebay.
And I can’t tell you how many times I’ve left him to fill out business paperwork, only to find that it’s been set aside for months.
It’s like he thinks I can teach him the ins-and-outs of our ledger systems and how to use Quickbooks and from which of our umpteen accounts the umpteen automatic payments are coming from, as if I can explain the accounting systems of all three businesses over an after-dinner cocktail.
Rum and Coke, anyone?
It’s all such a huge lack of communication.
Our state of affairs, and I’m not talking about infidelity, I’m talking about our state of chaos.
I understood that we were going to sit down Thursday morning, THIS morning, to work on paperwork.
To make a dent in the sorting and filing I started about two weeks ago and haven’t been able to finish. Do you see the comfy cat? I’m still trying to find the humorous side of that!
And the stuff at the top of the photo?
Yep. That’s Snowmen Stuff that I haven’t had the time to put away in the one and only storage space in our house.
(The Easter stuff is behind me.)
No garage. No attic. A dirt-floor basement.
Every seasonal item (including the mandated ten years worth of tax records) is stored in one 6’x8’ closet that I strategically fill and unfill.
So for now, my winter collection sits.
With the stuff I thought Warren and I were going to tackle Today.
To map out some sort of plan, some sort of division of labor, and a system that will keep us afloat.
A plan of attack that works for both of us. Not a plan that works just for him or just for me. A plan that works for The Couple.
I thought the project was going to be a joint venture.
Something we did Together.
Here’s how that went down.
I woke at 8:15 and plodded downstairs, at which time Warren told me he had a migraine and was going back up to bed to lie down.
Astute and aware being that I am, I noticed that he’d pulled a few mounds of receipts from the littered buffet top (that’s where he empties his wallet when it gets too full) and had begun sorting them on our dining room table.
I was heading out the door to my noon therapist appointment when he came downstairs at 11:15.
I return home to find Warren working in the field and to these neatly lined up rows of papers. Waiting for me to make the next move, maybe?
That’s what History would say.
I head to my office where, two minutes later Warren pops his head in to tell me he’s heading out to take care of this job and to go pick up those parts.
Not one single mention about the pact we made in the therapist’s office.
Not one single word about the neatly arranged payment slips.
So much for our plan to come Together and create a new strategy.
Another arrangement cast aside.
My needs once again Dis-Missed.
Once again I’m left to read his mind, second guess his thoughts and motives, and to literally pick up the pieces.
Rather than let my frustration fester, I did what I most often do and asked Warren if we could talk about what happened and how I was feeling.
Trish said to me today, during my personal appointment, that Warren and I “keep doing the same dance, just to a different song.”
I’ve been lamenting this for years.
“We give whole new meaning to the term ‘two ships passing in the night,’ ” I said to Warren this afternoon.
You see, when I questioned him about why we weren’t coming together as we’d arranged, he said he thought he’d fulfilled our agreement.
He was going to help out with the paperwork.
AND HE DID THAT.
“I had a migraine. I never expected to sleep that long because usually after twenty minutes I’m fine. And when I came downstairs, you had an appointment to go to.”
This is what I heard: “You’re the one who’s preventing us from making our deal happen.”
So much for communication, effective communication, I should say.
I tried to express to him how we don’t come together to do things, how the paperwork problem wasn’t as much about the paper as it was about him doing what he’s always done: Avoiding. Dodging communication and follow-through and commitment.
Seven years ago he lamented to his therapist that our marriage felt like a business relationship, and I have felt all these years that he was blaming me for that.
But today, as we argued, it dawned on me that maybe it’s been him all along, that he’s been the one keeping the emotional connection at arm’s length.
And I told him as much.
No surprise there, huh.
“You know,” I asked, “What does a non-businesslike relationship mean to you? What does that look like? Would it be just about the sex? Because to me, an emotional connection is about so much more than that, and you, yourself have admitted numerous times that you don’t like to talk about your emotions.”
“I’ve been making it a point to ask about your day, to pay attention to the stuff you’ve been telling me about your students and to ask about them and how they’re doing,” he replied.
Clearly, we are on two totally different ships…
This tango took us around our worn dance floor until my head was splitting from the tempo of it all.
“I can’t do this anymore. We’re just going in circles,” I said to Warren, “and right now my head is pounding and I have to pay bills.”
“I’ll stay here and work on it with you, if that will help you out.”
(Deep breath.)
(Sigh….)
Those are the two things I wish I’d done.
But I didn’t.
“NO!” I screamed at him, “NO! WHY DOES IT ALWAYS HAVE TO COME TO THIS, FOR ME TO BE ANGRY FOR YOU TO ACT?! NO!”
And then I said something I think I’ve only said one other time in my entire life.
“JUST GET OUT! GET THE FUCK OUT!”
Right now, the perfect day would be for me and Warren to somehow stop our sailing ships, to tether them together in the middle of the fucking ocean…
Hmmmm…
That begs the question, who’s going to jump his ship first?
Let’s not go there…
Let’s go here, to this perfect day, one where Warren and I are on the same ship, bobbing on a lake of gentle waves, we are nestled into one another and we are speaking the same language…
(In a world where men aren’t from Mars…)
What about you? What does your perfect (or not-so-perfect) day look like?
Soon…