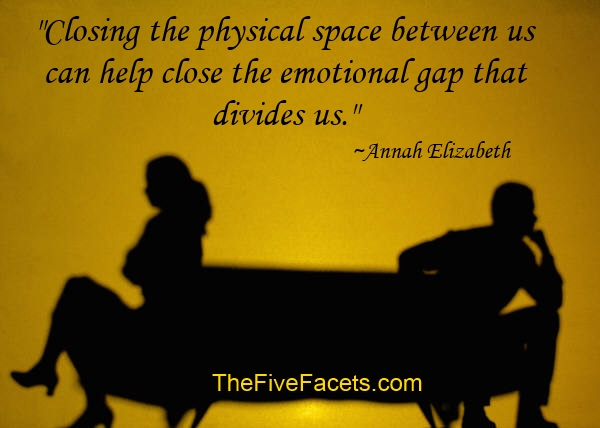 If you’ve ever been in a therapist’s office, you know the general layout of the room, which often includes a sofa of some kind and a plush chair or two.

Since the counselor typically sits in a chair, couples have one or two choices: separate into two different seats or join one another on the couch.

Regardless of our emotional states upon entering the room, Warren and I have joined one another on the latter.

A few months ago I had an epiphany: even though we chose to sit on the same piece of furniture, we were as far apart as we could possibly be.

Warren sat by one armrest and I nestled into the other one, with space for about four more people between us.

I wondered if this separation was indicative of some subconscious feelings and if it might actually be shouting its own self-serving statement: We are divided.

I talked to Warren about this and asked if we could meet one another in the middle, a means of making a different sort of statement.

“There’s something different about the two of you,” our guide said to us, “there just seems to be a shift in your energy.”

It was true, too. Closing the physical space between us also seemed to close the emotional gap that had divided us. The closeness allowed me opportunity to touch his leg when I wanted him to share something and to brush his arm when I made a joke.

The closeness allowed for Intimacy, Journeyer, something which had been lacking in the counselor’s office until then.

How many times have you found yourself walking ten feet ahead of or behind your partner?

How many times do you and your spouse watch television from opposite sides of the room?

Do you sit at opposite ends of the dinner table? Sleep in separate beds? Hang out in entirely different rooms in the house?

Though it is important that each person has her own space and the freedom to enjoy her autonomy, there are often times we create an emotional distance without realizing we are doing so.

Warren and I have always been good at giving one another permission to enjoy and pursue individualized activities and in recent years we’ve been working harder to spend more time pursuing mutual interests.

Now, we can proudly say we’re paying more attention to this subtler form of emotional union.

What about you, Journeyer? Can you identify ways that you and your partner might be unwittingly causing a divide in your intimacy?

2 Comments on “The Marital Sofa”